Editor’s Note: The following piece was prepared for the Kavli Institute for Theoretical Physics (KITP) at the University of California, Santa Barbara. The article highlights three members of Syracuse’s Department of Physics: Mark Bowick, the Joel Dorman Steele Professor of Physics, as well as a visiting scientist and deputy director at KITP; Cristina Marchetti, the William R. Kenan Distinguished Professor of Physics and a KITP general member; and Suraj Shankar, a Ph.D. student and KITP Graduate Fellow.

A murmuration of starlings. The phrase reads like something from literature or the title of an arthouse film. In fact, it is meant to describe the phenomenon that results when hundreds, sometimes thousands, of these birds fly in swooping, intricately coordinated patterns through the sky. 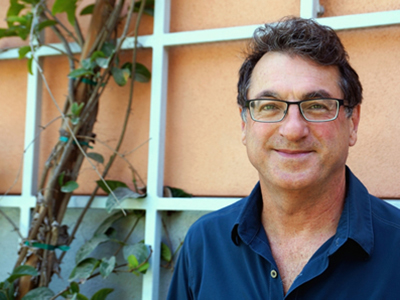 But birds are not the only creatures that flock. Such behavior also takes place on a microscopic scale, such as when bacteria roam the folds of the gut. Yet bird or bacteria, all flocking has one prerequisite: The form of the entity must be elongated with a “head” and “tail” to align and move with neighbors in an ordered state.

Physicists study flocking to better understand dynamic organization at various scales, often as a way to expand their knowledge of the rapidly developing field of active matter. Case in point is a new analysis by a group of theoretical physicists, including Mark Bowick, deputy director of UC Santa Barbara’s Kavli Institute for Theoretical Physics (KITP).

Generalizing the standard model of flocking motion to the curved surface of a sphere rather than the usual linear plane or flat three-dimensional space, Bowick’s team found that instead of spreading out uniformly over the whole sphere, arrowlike agents spontaneously order into circular bands centered on the equator. The team’s findings appear in the journal Physical Review X.

“Whether it’s bacteria swarming, cells roaming or energy-consuming ‘arrows’ flying, these systems share universal characteristics independent of the precise size and structure of the agents as well as their detailed interactions,” said corresponding author Bowick, who is on leave from Syracuse University while in his role at KITP. “The ordered states of these systems are never perfectly uniform, so fluctuations in density generate sound, much in the same way that wind instruments create music.”

On curved surfaces, the team, which includes KITP general member [and Syracuse’s Kenan Distinguished Professor of Physics] Cristina Marchetti and KITP graduate fellow Suraj Shankar, found “special” sound modes that don’t dissipate and flow around obstacles. According to Bowick, these special modes correspond to special harmonics or tones that don’t mix with all the other harmonics.

He also noted that these modes are special precisely because the band geometry of the equator is very different from the planar geometry of a flat surface. For example, a particle moving on a ring comes back to its starting point even though it moves along a “straight” path. This doesn’t happen on a plane, where entities continue forever in a straight line, never to return, unless they encounter an edge. This feature is a direct consequence of the very different topology of the sphere and the plane.

Steady flocks on a sphere and a catenoid. (Courtesy of Suraj Shankar)

“Even though a sphere itself has no edge, the swarming patterns have an edge—the edge of the band,” Bowick said. “So simply by locally consuming energy, active agents on the sphere spontaneously swarm and create an edge.”

The authors also analyzed another curved shape, an hourglass-shaped figure called a catenoid. Unlike a sphere on which parallel lines converge, the catenoid’s concave curvature causes parallels to diverge. This opposite curvature pushes the flocking entities and associated sound waves to the top and bottom edges of the hourglass, leaving the middle bare—the opposite of what happens on a sphere.

“Just the fact that these systems flock is pretty remarkable because they dynamically generate motion,” said Shankar, a doctoral student in the soft matter program in Syracuse University’s physics department. “But they are far richer systems than we expected because they also generate these ‘topologically protected’ sound modes.”