As High School Students, Kim La ’20 and The Ngo Got Hands-on Training in A&S Lab 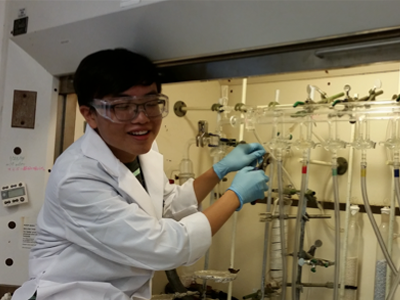 Two Syracuse City School District rising seniors were welcomed to Syracuse’s campus to get a taste of lab life and to prepare for college. Full-ride scholarships to top universities for both students show the experiment was a huge success.

“Including local high school students in university research is critical to open new educational paths for local, underserved students. We want to provide a unique insight into research and academic life at Syracuse University and an introduction to higher education in general. We hope to create opportunities for these young researchers that may not exist otherwise,” says Karin Ruhlandt, Distinguished Professor of Chemistry and dean of the College of Arts and Sciences, who invited the students to join her lab and mentored them in their research and college preparations.

The students, Kim La ’20 and The Ngo, both graduated from the Institute of Technology at Syracuse Central High School—La as valedictorian in 2016 and Ngo with honors this May. Both grew up in Syracuse’s Vietnamese community, where they translated for older community members and excelled academically.

They each stood out in teacher Bobby Kunnath’s algebra 2 and pre-calculus classes. “I knew that they were both exceptionally bright and hard-working students with a passion for the sciences. I thought that getting them involved in research at Syracuse would open more doors for them,” he says.

Fortunately for La and Ngo, Kunnath has a close connection to research on campus: his wife, Miriam Gillett-Kunnath, research assistant professor, works in the Ruhlandt lab. Both Gillett-Kunnath and Ruhlandt were delighted to welcome such inquisitive students into the lab.

“They brought a strong work ethic and worked hard to catch up on the basics and learn synthetic chemistry. They were always willing to try new things and just dove in asking questions—it’s amazing what these students were able to accomplish,” Gillett-Kunnath says. 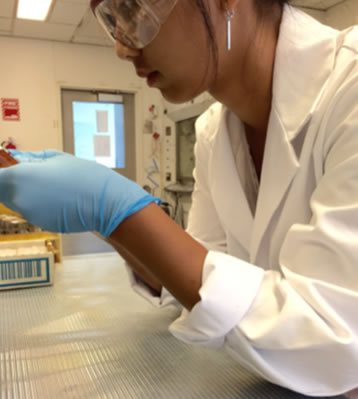 La joined the Ruhlandt lab in the summer of 2015 and has worked on two different projects exploring chemical bonding behavior and synthesis of two types of naturally occurring metals. She received a full-ride scholarship through Say Yes to Education and chose Syracuse University for its campus and convenient proximity to home.

Now a rising sophomore, La looks forward to a full year of research in the Ruhlandt lab, is considering majoring in chemistry or biology, and has developed a love of communicating her work.

“My experience in the Ruhlandt lab has been amazing. I’ve learned so much and cannot wait for more research posters and presentations to come,” she says.

Ngo, who began research in the Ruhlandt lab in the summer of 2016, credits the animated television show “Dexter’s Laboratory” for his introduction to the wonderful world of chemistry. “It’s silly, but in ways, I really did want to become a Dexter,” he says, referring to the main character, who is described as a “child genius who whips up dazzling, world-saving inventions in his secret laboratory.”

After investigating a chemical compound, which could potentially be used in semiconductor wafer production, Ngo was accepted to Columbia University with a full-ride scholarship from Columbia’s Academic Success Program. The program assists first-generation college students acclimate to university culture.

As a new college student, Ngo is still exploring career options, but notes, “I do know something for sure: I want to continue to research.”

And the gratitude goes both ways: “I was continually humbled by all that they have overcome to be present everyday in the lab—to work hard with a smile, never complaining and eagerly wanting to learn,” says Gillett-Kunnath.