For Niall Shannon ’20 and Mina Diamantis ’19, Invent@SU was hands-on engineering at its best. They saw a problem in how many traditional wheelchairs can tip over and believed they could come up with a solution. 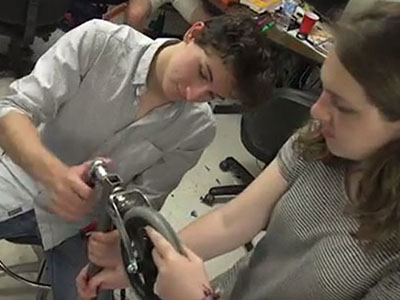 Shannon and Diamantis work on their non-tippable wheelchair.

“This is what I always wanted to do. I’ve had ideas in the past where I said, this solves a problem and I think other people could find it very useful,” says Shannon.

As part of the invention accelerator program, Shannon and Diamantis competed alongside nine other teams on campus to design, prototype and pitch new products. Each team receives a budget for materials and help from design and engineering faculty. Over the course of six weeks, students workshop both their invention and a “Shark Tank”-style presentation summarizing why their product fills a need.

“It is what you are going to do in the real world, having the freedom to do what you want at a younger age,” says Diamantis.

Before final judging, students present to business and industry leaders, who act as guest evaluators.

“Out of the six weeks, you pitch it five times,” says Diamantis. “You want to explain your product in a better way so you can get better feedback and how to improve it. It is just improving on what you had each week and getting better.”

Invent@SU teams were made up of students from the College of Engineering and Computer Science and the industrial design program in the College of Visual and Performing Arts. The program brings together different skill sets and approaches.

“Industrial designers and engineers and computer scientists all think about design, but we come at it from a different way. Some more form over function, some more function over form. So it has been an incredibly eye-opening experience for the students, but also for the faculty team to work together across disciplines,” says College of Engineering and Computer Science Dean Teresa Abi-Nader Dahlberg.

There are 10 teams in the Syracuse University Campus Accelerator and 10 teams competing against each other in an accelerator at SU’s Fisher Center in Manhattan. Every team does research to make sure their invention is unique and what they will need to submit a provisional patent application.

“They learn about intellectual property and how to search prior art in the patent database,” says Dahlberg. 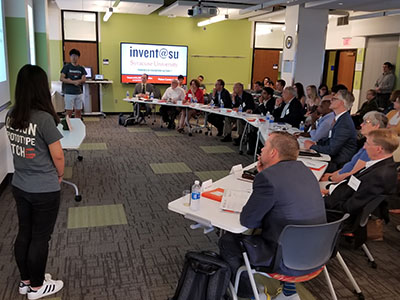 A team presents its invention to judges at the 2017 Invent@SU competition.

At the end of six weeks, all 10 teams on the Syracuse campus presented to a panel of judges, including SU Trustee Bill Allyn G’59. Allyn and his wife, Penny, supported Invent@SU on the Syracuse Campus.

“Five or six weeks to do what they did, it’s unbelievable,” says Allyn.

The judges said they were impressed by all of the student’s inventions, but ultimately Shannon and Diamantis’ wheelchair, named the Rockin’Rolla, took first place and a $5,000 prize.

Allyn believes there is endless potential for collaboration between different programs at Syracuse University.

“I just love being able to see these kids create things that we never could have done. We didn’t have 3D printing, we didn’t have computers—we had a slide rule,” says Allyn with a laugh. “To see the enthusiasm, the creativity and the ability to build a prototype is absolutely fantastic.”

In 2018, Invent@SU will be opened up to all Syracuse University students, providing a uniquely orange opportunity to design, prototype and pitch.