Priscilla Tyree Williams ’86 holds a unique distinction at Syracuse University. She is the first African American woman to have graduated with a civil engineering degree from SU. Today, she oversees the implementation of the capital improvement program for the City of Raleigh, North Carolina, Construction Management Division as the city’s construction projects administrator. And she is an ardent supporter of the College of Engineering and Computer Science—generously giving back to the college for the past 10 years. 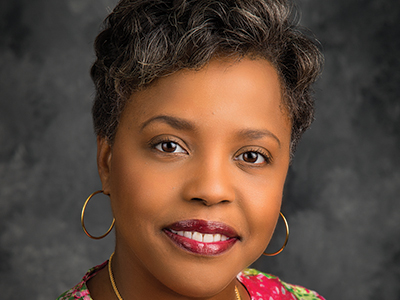 But if you had told her when she was an 18-year-old college student that her relationship with the college would eventually be so strong, she would have had her doubts.

“There were times when I did not feel supported during my time at Syracuse. That made it very difficult for me. It made me question if I was even cut out to be an engineer,” says Tyree Williams.

Unfortunately, experiences like hers are all too common for women and minorities in science, technology, engineering and mathematics (STEM). While progress has been made, these disciplines have a historically poor track record of inclusion at a societal level. The fact that she earned her degree in the face of these obstacles is due in large part to sheer determination; however, key relationships and occurrences brightened her overall SU experience over time, and eventually inspired her to embrace her alma mater and her calling as an engineer.

“I am where I am today because of Dr. James Mandel,” she says.

As a sophomore, Tyree Williams recalls Emeritus Professor Mandel walking into her CIE 271 class in a bad state. He informed the class that his father was suffering from cancer and asked that the students keep him in their thoughts and prayers. Tyree Williams was moved by the pain her teacher was feeling and chose to send him an Easter card with some words of encouragement. She says, “It wasn’t until after the card was sent that my classmate informed me that Dr. Mandel was Jewish. I felt horrible, but he called me to thank me anyway.”

Her kind gesture was the start of a special relationship. That summer, Tyree Williams’ own father was diagnosed with stage four pancreatic cancer. In delivering the bad news to Mandel, she learned that his father had passed away over break.

“During that time, I was just hanging on and Dr. Mandel would invite me to his office to talk and he’d invite me to his home to have dinner with him and his wife. They’d send me home with leftovers. Their support helped me keep it together during an incredibly difficult time.”

Sadly, the following January, her father lost his battle with the disease. Tyree Williams called Mandel and he went to work. He registered her for all of her classes and said, “I’ll see you back on campus soon.” He served as a steadfast support at a time when she was experiencing tremendous upheaval and grief.

When Tyree Williams returned to campus, she relied on Mandel, her peers and Professor Sam Clemence for emotional and academic support. She was active on campus, participating in the Black Celestial Choral Ensemble, the Alpha Kappa Alpha sorority and the National Society of Black Engineers (NSBE). Through perseverance and hard work, she completed her degree.

“As mentors, Dr. Mandel and Dr. Clemence validated me by truly caring about me. This is why I’m still a practicing engineer. In many ways, I still want to make these professors proud. I want to be a student they remember because of my character and determination.”

Despite the highs, the lows stood out for Tyree Williams for many years. She regretted that it took her five years to complete her undergraduate degree and certain negative experiences were still raw. Then came an out-of-left-field invitation that changed everything.

“Professor Dawit Negussey invited me to return to campus to speak at a Coming Back Together event, which is a reunion for African American and Latino alumni,” said Tyree Williams. “I accepted on the condition that I could be perfectly honest about my experience—sharing the bad with the good.”

Negussey agreed and Tyree Williams accepted. During her return to campus, former dean Eric Spina provided Tyree Williams an opportunity to lay bare the bad experiences that had tainted her Syracuse University experience. “Dean Spina was willing to hear the ugly side of my experience and then showed me how the college had made improvements to address many of my concerns. The college had made significant strides in its support of students and retention of underrepresented students. It really impressed me.”

The experience at Coming Back Together helped inspire Tyree Williams to establish the Dr. James A. Mandel Prize for Academic Achievement along with fellow alumni John Ricks ’75, Colin Danville ’80, Clyde Forbes ’76 and Winfred Battle ’81. The Mandel Prize is the first award established by alumni of color in honor of a Syracuse University faculty member. It is awarded annually to a graduating senior in the Department of Civil and Environmental Engineering who is an active member of the NSBE. This year, it was awarded to Sterling T. Grimes ’17.

Tyree Williams’ journey from undergraduate to distinguished alumna has not been straightforward or always sunny, but she has formed a meaningful relationship with Syracuse. And she gives the College of Engineering and Computer Science credit for the progress that has been made in supporting women and minorities in STEM at SU. However, she also sees that there is still work to be done on this front in our society.

“Programs that support diversity are valuable and vital. There’s been an evolution of women’s role and how we fit in the profession—especially in construction. Still, even in 2017 we encounter outdated mindsets on the job. STEM programs are critical for empowering young women in engineering and computer science and I’m proud to be able to support them.”

Today, Tyree Williams praises the college’s efforts, including the Nick Donofrio Scholars diversity program, which provides an annual cohort of students with student support, research opportunities and camaraderie to encourage a high level of retention. For the college and the participating students, the program has been a resounding success.

Finally, despite doubts early in her education and her career, she is confident that she made the right choice in becoming a civil engineer.

“My career has been a journey with many tests, but I have learned to recognize that I can do this and I love it. There is something special about hearing your customers talk about what they need, working with design professionals, putting that through development of plans and specs, and moving ahead with construction and getting your boots muddy. You see the foundation go down, the roof go up, the windows go in. Before you know it, you smell fresh paint and new carpet. You make something real. Civil engineers make life easy and touch every aspect of peoples’ lives. I’m proud to say that’s what I do every day.”