A researcher in the College of Arts and Sciences is the recipient of a prestigious CAREER grant from the National Science Foundation (NSF). 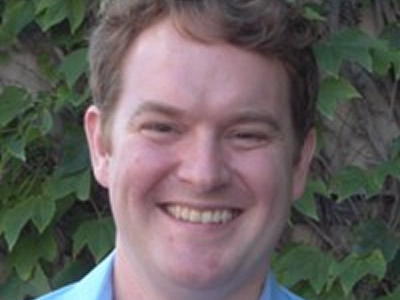 William Wylie, assistant professor of mathematics and a member of the Geometry/Topology Research Group, is using the five-year, $472,500 award to study Riemannian geometry. By exploring the geometries of multidimensional spaces, he hopes to provide researchers in other fields with methods, models and tools for problem solving.

“A great example of the way geometry contributes to other fields involves the recent detections of gravitational waves,” says Wylie, a specialist in differential geometry. “During the 20th century, theoretical physicists and mathematicians—most famously, Albert Einstein—predicted the existence of black holes, and developed geometric equations to describe them. Today, LIGO [a national facility known as the Laser Interferometer Gravitational-Wave Observatory] uses these mathematical models to measure tiny ripples in spacetime, caused by gravitational waves from colliding black holes.”

Today, mathematicians such as Wylie use different types of calculus and algebra to study Riemannian manifolds, whose mathematical models, in turn, benefit physicists, biologists, chemists and engineers.

Exploring the curvature of the Earth’s surface is one way to understand Riemannian manifolds.

Some physicists believe the universe has as many as 11 dimensions, although we will never “see” them with our two-dimensional brains.

“The universe is a prime example of curved space,” Wylie says. “Einstein’s theory of general relativity implies that gravity is modeled by equations involving curvature. We use Riemannian geometry to find out what else we can say about geometry and curvature.”

Since the 19th century, mathematicians have been able to model two-dimensional spaces into one of three kinds of shape: flat like a sheet of paper, with no curvature; closed like a ball, with positive curvature; or flared uniformly like a saddle, with negative curvature. In the 1970s, American mathematician William Thurston proposed that any three-dimensional space has eight kinds of shape.

Wylie uses sophisticated tools to investigate the shapes of spaces. One of his goals is to develop a geometric theory of manifolds with density, information that might ultimately determine if the universe is finite and has a size, or is infinite and goes on forever.

Knowing the average density of matter is critical to this kind of work. Even though astronomers agree that dark energy (i.e., energy that does not give off light and, thus, evades detection) accounts for 73 percent of the universe’s critical density, they still do not know if energy, in general, is uniform or variable.

Current data suggests an ever-expanding universe, shaped like a three-dimensional version of an infinite tabletop, with zero curvature.

Riemannian geometry, which grew out of Euclidean geometry, might hold clues to understanding the universe’s origin. Wylie considers Euclid’s 2,000-year-old study of lines and triangles one of the most enduring areas of mathematics.

“Modern variants of geometry have evolved in divergent ways, but, by thinking deeply and abstractly about simple, concrete objects, we can produce beautiful mathematical theories with powerful applications,” he says.

In addition to research, Wylie’s project promotes education. The NSF grant will underwrite professional development workshops for local secondary education teachers; the creation of differential geometry curricula at the graduate and undergraduate levels at Syracuse, with emphasis on interdisciplinary applications benefiting researchers in mathematics and science; and the training of mathematics graduate students in best strategies for engaging students in introductory calculus courses.

Wylie attributes the “inherently collaborative” nature of his project to the support and mentorship of his colleagues. They include Jack Graver, professor of mathematics, as well as Helen Doerr and Joanna Masingila, Meredith professors in the School of Education also affiliated with the Department of Mathematics.

“Jack has been a fantastic mentor in the teaching of geometry,” Wylie adds. “Helen and Joanna, in turn, have been vital in helping me develop the educational component of the project. I have benefited greatly from the partnerships between A&S and the School of Education.”

Uday Banerjee, professor and chair of mathematics, considers Wylie deserving of the CAREER grant. “Will is the first junior faculty member in a long time to receive such a prestigious award,” Banerjee adds. “He is a very good teacher, and the educational component of his project will really benefit our students.”