A professor in the College of Arts and Sciences is the recipient of an honorary degree from the Federico II University of Naples. 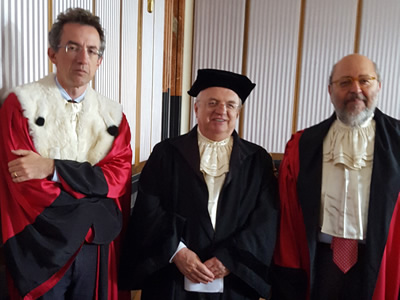 Tadeusz Iwaniec, the John Raymond French Professor of Mathematics, received the “Doctor Honoris Causa in Mathematical Engineering” at a special ceremony in Italy on May 16.

Iwaniec was the second mathematician awarded the “Doctor Honoris Causa” in the history of the University of Naples. (The first was Princeton mathematician John Nash in 2003.) Founded in 1224, Naples is the world’s oldest, public, nonreligious university.

“This is an amazing honor,” Iwaniec told the overflowing room. “I would like to thank you for the highest award offered by the historic and triumphant University of Naples, in recognition of my modest contributions. It signifies my lasting research commitments to the faculty, and my desire to help scholars and Ph.D. students in the mathematics department.”

Iwaniec added that mentoring the next generation of scholars is a “noble commitment, which should be the highest priority of every scientist.”

The hour-long program featured remarks by several of Iwaniec’s colleagues at the University of Naples, including Gaetano Manfredi, university rector; Piero Salatino, president of the Polytechnic School and Basic Sciences; Gioconda Moscariello, director of the Department of Mathematics and Applications “Renato Caccioppoli”; and Carlo Sbordone, a mathematics professor.

Included was a presentation by Iwaniec titled “The Queen of All Sciences Reveals Her Beauty via Nonlinear Elasticity Problems.” Much of it focused on engineering mathematics (also known as “technomath”), a fast-growing branch of mathematical analysis used in engineering and industry.

On May 15, Iwaniec lectured about another branch of mathematical analysis called the calculus of variations, dealing with extreme and critical points of functions.

Iwaniec’s connection with the University of Naples dates back to 1990, when Sbordone invited him to campus. Every year since then, he has spent several weeks there conducting research; co-authoring articles; and mentoring junior faculty, postdoctoral scholars and graduate students.

More than a dozen Neapolitan students have since come to Syracuse to study, thanks to support from the National Science Foundation (NSF). “Syracuse and the NSF are very interested in promoting gender equity in the STEM [science, technology, engineering and mathematics] fields,” Iwaniec says. “We’re building a talent pipeline between both universities.”

“We are educating a new group of professionals to use advanced tools from applied mathematics to solve challenging problems,” says Moscariello, who describes Iwaniec’s contributions as “intense and fruitful.” “[The course] benefits scientists, mathematicians and engineers alike.”

Iwaniec and Sbordone trace their relationship to a 1974 conference in Rome. The latter recalls how Iwaniec and his mentor at the University of Warsaw eventually took the field by storm with their analytic theory of quasi-conformal mapping, showing how angles between curves distort in a uniformly bounded manner. He and his mentor published their theory in 1982; a year later, Iwaniec, then in his mid-30s, was one of the youngest invited speakers at the International Congress of Mathematicians.

“Four years later, I invited Tadeusz to Capri for a conference on ‘Methods of Real Analysis and PDEs [partial differential equations],’” says Sbordone, who is co-organizing an international conference this summer in honor of Iwaniec’s 70th birthday. “It was due to his generosity with sharing new ideas and methods that the collaboration, particularly among my younger colleagues and students, was phenomenal. It originated a series of long-term visits to Naples.”

Iwaniec’s first Italian sojourn coincided with his groundbreaking article in Annals of Mathematics (Princeton University) about Hodge theory, helpful in studying algebraic geometry. The article, along with subsequent ones by Iwaniec and Sbordone, fired the imaginations of the Neapolitan students and led to breakthroughs in the study of PDEs.

“Tadeusz’s unconditional support for his junior colleagues is phenomenal,” says Uday Banerjee, professor and chair of the mathematics department at Syracuse. “He is extremely successful in mentoring graduate students because of his patience, compassion and sense of responsibility. I am proud to call him a friend and colleague.”

A member of the Finland Distinguished Professor Program from 2009-14, Iwaniec studies nonlinear analysis and geometric function theory. “I also am interested in topics that intersect modern areas of applied mathematics,” he says, referring to nonlinear elasticity, materials science and the microstructure of crystals. “For instance, the theoretical prediction of failure of bodies caused by cracks appeals to researchers in the engineering fields. It is in this way that a broad cultural background is becoming more and more essential in both pure and applied mathematics.”

The recipient of numerous honors and awards, including the “Philosophiae Doctor Honoris Causa” from the University of Helsinki in 2007, Iwaniec is involved with a range of research projects. Among them is electrical impedance tomography, a noninvasive imaging technique that helps doctors visualize human organs and body parts to better understand their physiological and anatomical makeup.

Iwaniec has co-authored more than two dozen papers on quasi-conformal hyper-elasticity with Jani Onninen, associate professor of mathematics at Syracuse. In 2011, they and fellow Syracuse professor Leonid Kovalev solved the 50-year-old Nitsche Conjecture, one of the oldest extremal problems in the theory of minimal surfaces. 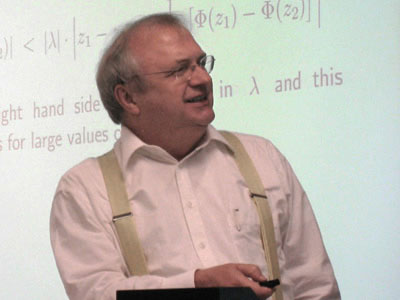 Iwaniec is a pioneer of mathematical analysis, useful in engineering and industry.

Internationally respected, Iwaniec is a foreign member of the Royal Academy of Physical Sciences and Mathematics of Naples, the Finnish Academy of Science and Letters and the Polish Academy of Sciences. He earned undergraduate and graduate degrees, including a Ph.D. in mathematics, at the University of Warsaw in Poland.

Cathryn Newton, dean emerita of A&S, professor of interdisciplinary and Earth sciences and a special advisor to the Chancellor and provost for faculty engagement, says Iwaniec is armed with an “incisive intellect.”

“Tadeusz pursues these remarkable and highly productive mathematical collaborations throughout the world. Wherever he goes, ideas flow among colleagues,” she says.