A researcher in the College of Arts and Sciences is providing fresh insights into the “Great Oxidation Event” (GOE), in which oxygen first appeared in the Earth’s atmosphere more than 2.3 billion years ago. 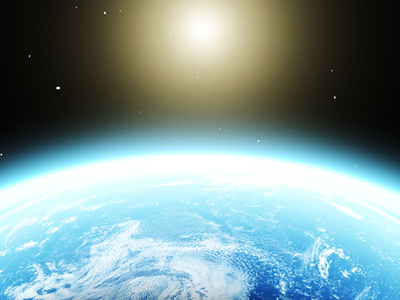 Research in which Syracuse’s Christopher Junium is involved is providing fresh insights into the “Great Oxidation Event,” when oxygen first appeared in Earth’s atmosphere. (Photo by Denis Tabler/Shutterstock Inc.)

Christopher Junium, assistant professor of Earth Sciences, is part of a team of researchers led by Aubrey Zerkle, a biogeochemist at the University of St. Andrews in Scotland, which has uncovered evidence of an interaction between nitrogen and oxygen in ancient rocks from South Africa. The discovery not only illuminates how life evolved alongside changes in the chemistry of the Earth’s surface, but also fills in a 400-million-year gap in geochemical records.

Their findings are the subject of a major article in Nature (Macmillan Publishers, 2017).

“We’ve captured, for the first time, the response of the nitrogen cycle through this major transition in the Earth’s surface environment,” says Junium, pointing out that global oxygenation was not an instantaneous event, as the name implies, but protracted over hundreds of millions of years. “There are particular aspects of the nitrogen cycle, making it very sensitive to the presence of oxygen.”

Scientists have long suspected that certain visible signals have accompanied the GOE in geochemical records; however, many of the records are plagued with gaps.“Understanding the nitrogen cycle through the Earth’s history is important because it controls global primary productivity, which, in turn, regulates climate, weathering and the amount of oxygen at the Earth’s surface,” says Junium, a sedimentary and organic geochemist.

Working with cores of sedimentary rock from the South African town of Donkerhoek, Junium and his colleagues used nitrogen stable isotopic analysis to record environmental conditions during the GOE. They found that the first occurrence of widespread nitrate coincided with the initial appearance of oxygen in the atmosphere. 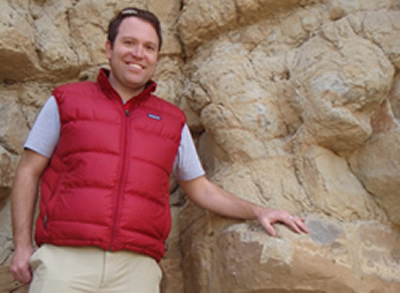 The prevailing notion is that such a confluence of events would have triggered the rapid diversification of complex organisms, ones reliant on atmospheric oxygen. Instead, more than a billion years passed before oxygen levels were high enough for the evolution of complex eukaryotes (i.e., cells or organisms sharing complex structural characteristics) to occur. Why the delay?

“It remains an item of intense interest amongst the geochemical community, a question that we are actively seeking to answer,” Junium adds.

Part of the answer may reside in another study that has looked to traces of the element selenium in sedimentary shale, revealing the amount of oxygen in the Earth’s atmosphere some 2 billion years ago.

“There was a quarter of a billion years or so in which the Earth’s oxygen level was high and then sunk back down again,” says Junium, citing a recent paper co-authored by Eva Stueken, a university research fellow at St. Andrews. “The selenium cycle was perturbed in such a way that there was enough oxygen to generate nitrate and to potentially support complex life.” 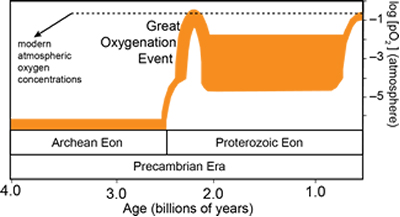 Estimated concentration of oxygen in the Earth’s atmosphere over the Precambrian Era (4.56 to 0.541 billion years). Junium says that, during the GOE, oxygen concentrations in the atmosphere increased by as much as four orders of magnitude, near or above modern levels. (Figure adapted from Zerkle et al., 2017, and Lyons et al., 2014.

Zerkle says that catastrophic upheavals provide a critical window into how the biosphere responds to shifts in the environment. “Understanding how life on this planet has responded to geochemical changes in the past may help us predict responses to future changes, including the Earth’s warming climate,” she says. “It also informs our search for habitable planets in other solar systems.”

An essential element in all living organisms, nitrogen is responsible for the formation of proteins, amino acids, DNA and RNA. It also accounts for 80 percent of the Earth’s atmosphere.