A Better Way to Farm Algae

Scientists have long known of the potential of microalgae to aid in the production of biofuels and other valuable chemicals. However, the difficulty and significant cost of growing microalgae have in some ways stalled further development of this promising technology. Bendy Estime, a biomedical and chemical engineering Ph.D. candidate, has devoted his research to this area, and developed a new technology for energy efficient cultivation and harvesting of microalgae. 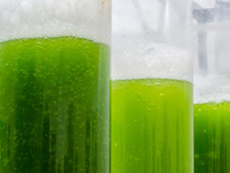 Estime’s research has been published as a peer-reviewed article in Scientific Reports on Jan. 19. He and his research advisors, Distinguished Professor Radhakrishna Sureshkumar, chair of the Department of Biomedical and Chemical Engineering, and Professor Dacheng Ren, have secured a provisional patent for the technology.

“My goal was to improve the growth of microalgae,” says Estime, who first studied biofuels as an engineering student in his native Haiti.

“The study is an attempt to address three ‘bottlenecks’ in microalgae cultivation,” says Sureshkumar. “When you grow algae in suspension, they tend to stick to the walls of a container, making the container opaque. This makes it more difficult for required light to get through to the algae. The second issue is that there has to be consistent stirring of the container to ensure that light does reach all layers of the algae. A third issue is the difficulty of separating algae from the broth, which requires time and energy, and is therefore costly.”

Estime developed a new medium to culture and harvest microalgae. The medium, Tris-Acetate-Phosphate-Pluronic or TAPP, can transition from solution to a gel through relatively small variations in temperature. Microalgae are seeded in the medium at 15 degrees celsius. When the temperature is increased by seven degrees, the medium becomes gelatinous. In this new medium, microalgae grow in clusters that are up to 10 times larger than those grown in the traditional medium. Once they are grown, the temperature is decreased, and the medium is returned to a solution. The algae is separated out through gravity, and can then be harvested.

The medium prevents algae from growing on the sides of a container, letting light penetrate to each level of algae. This eliminates the need for constant stirring. When the medium is converted back to a solution, algae can be more easily separated out and removed from the container.

“The industrial applications of this system are appealing,” Estime says. “This system would harvest microalgae 10 times faster than traditional systems and in an energy- efficient fashion.”

“This study presents a novel method to harvest algae and other cells with low cost, which has potential applications in multiple fields,” says Ren, professor of biomedical and chemical engineering. “It makes it more realistic for researchers to pursue microalgae as a solution.”