While the average person associates boiling with cooking dinner, the process is also widely used to transfer heat across surfaces. It is used in refrigerators, in industrial boilers and even on the international space station to reject heat from its systems into outer space. In fact, around 90 percent of electricity in the United States is generated by steam turbines, which require boilers. More efficient boiling can result in significant energy and cost savings. That’s why researchers continue to study the process. 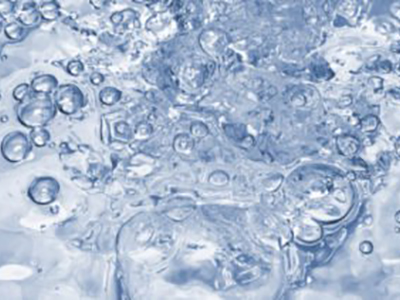 Assistant Professor Shalabh Maroo in the College of Engineering and Computer Science has discovered a new way to improve the efficiency of boiling heat transfer. Featured in a recent publication of Langmuir, Maroo’s research enhances the critical heat flux­­ (CHF)—the maximum practical heat transfer in boiling.

“Even though boiling has been studied for over 50 years, we have introduced and validated a new mechanism to increase boiling heat transfer,” says Maroo.

The new mechanism developed by Maroo and former Ph.D. student An Zou ’15 is based on early-evaporation of the microlayer, which is a thin liquid film present at the base of a bubble. Microridges on the surface partition the microlayer and disconnect it from bulk liquid, causing it to evaporate sooner, thus leading to increase in bubble growth rate, departure frequency and CHF. Compared to a plain surface, there is a ~120 percent enhancement in CHF with only an ~18 percent increase in surface area—the highest such enhancement reported in literature. Prior to Maroo’s discovery, researchers enhanced CHF by modifying the surface where the heat transfer takes place by increasing nucleation site density, improving surface wettability or wicking effect, separating pathways for liquid and vapor flows, and increasing surface roughness.

Maroo’s discovery will allow coupling of the new mechanism with existing mechanisms to further push the limits of boiling heat transfer, enable the design of micro and nanostructures to achieve desired transfer of heat with boiling, and advance the next-generation technology of thermal management of electronics.