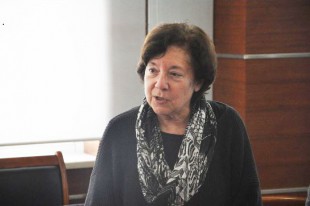 Linguistics Professor Jaklin Kornfilt, a member of the Languages, Literatures and Linguistics (LLL) faculty since 1983, specializes in syntactic theory, theoretically informed linguistic typology, and the syntax—morphology interface, with special emphasis on the syntax and morphology of Turkish and of the Turkic languages. She’s also very kind. We recently reached out to Professor Kornfilt with 4 questions, and she graciously responded with an update on her career growth after a very busy summer.

Q.You were back in Germany to teach recently. What was the experience like?

A. I was in Germany in August and taught a class at a summer institute—the Göttingen Spirit summer school in linguistics at the University of Göttingen. This was a relatively short (just one week) but very condensed summer school, with classes held every day. Each class lasted 90 minutes (without a break), which meant a lot of preparation and also with a good deal of necessary care devoted to the style of presentation, so as to keep the attention of the audience alive. The audience consisted mainly of doctoral students, but there were also colleagues who came, i.e. colleagues who taught at the summer school as well as colleagues among the linguists at Göttingen University. This was both a challenge and an enrichment for each one of us, given that we didn’t just listen to our colleagues’ presentations when we visited their classes, but also asked questions and made comments. The fact that this particular summer school was relatively small in terms of the number of courses (only four) made it possible for our auditing to be active in this sense.

This was not the first time that I taught at a summer school in Europe. In the summer of 1998, I taught a course on theoretical approaches to historical syntax at the summer school of the Linguistic Society of Germany (it took place at Mainz University that summer), and in the spring of 2008, I taught a course on the syntax of Turkic languages, at the Leipzig spring school on linguistic diversity, which was held at the University of Leipzig. All of these experiences are extremely valuable, while being different from each other.

Q. You are a recipient of a Humboldt Research Award, among other honors. What was that like, and is it unique for a linguist to receive such an honor, which typically might go to STEM field researchers?

A. Being a recipient of the Humboldt Research award was a wonderful experience, from various points of view. Of course, the monetary side of it made the trip to Germany and a two-semester stay possible; that stay, in turn, made it possible for me to co-teach a semester-long seminar on one of my own research projects, namely the syntax and semantics of partitive constructions from a cross-linguistic perspective. I had taught in German universities before, but mostly “accelerated” or “concentrated” courses (which means, in that system, that one teaches one semester’s worth of classes in a concentrated fashion, e.g. by teaching every day, and/or during longer days, for a period shorter than one semester); I had taught a course during a full semester only once, but not in a collaborative fashion. Also, as I mentioned in item 1 above, I had taught in summer schools in Germany in the past—likewise in a “concentrated” mode of teaching. But I had not co-taught a semester-long course together with a colleague in that colleague’s own system until then; this was quite a new experience for me. In addition, this stay enabled me to establish two research projects with my two hosts; those projects are still ongoing. Furthermore, the two meetings organized by the Humboldt Foundation for that year’s Humboldt prize recipients and Humboldt Fellows were very interesting in terms of meeting outstanding colleagues in their respective fields and hearing about their research projects and their own experiences in Germany.

Geert Booij, a very well-known Dutch morphologist, received a similar award that year, and was spending, I think only one semester, in Berlin. In addition, Jindrich Toman, a respected Slavicist, received a similar award as well, and was doing research at the University of Regensburg. He, too, is a modern linguist, and not a traditional philologist. It is indeed unusual for a linguist to receive an honor which typically would go to a STEM field researcher, and the Humboldt Prize as well as the Humboldt Fellowships typically go to STEM field specialists, as you mention; the fact that three linguists were selected for Humboldt awards was a novelty that year. As a matter of fact, the Humboldt administrators whom I met during my stay in Germany told me that they would try, from then on, to pay attention to interesting research in the humanities, too, provided that it did have scientific aspects. Thus, linguistics fits the bill, given that it investigates language scientifically. I would be surprised, however, if the Humboldt Foundation’s administrators were to include areas in the humanities which do not have a scientific dimension.

Q. What was it like working with Noam Chomsky, who is considered to be the father of modern linguistics?  How did this come to be?

A.  I was his student. I took his classes at MIT for credit (as a Harvard student, I could do this easily), and I audited those classes later on. He accepted my invitation to be a member of my dissertation committee, and he ended up being, in practice, my main advisor. Since then, we have stayed in contact; we correspond about both linguistics-related and politics-related issues, and I try to have an appointment with him when I am in the Boston area.

I should say a few more words about the experience of being one of his students, especially of working on one’s dissertation with him as an advisor. Chomsky is incredibly generous as an advisor; during the dissertation year, the student meets with him typically once a week. Obviously, this is an amazing investment of time and energy for someone like Chomsky, who has so many commitments on his time; back then, he was also teaching, and so had even less time—not to mention all his other “advisees”, i.e. all doctoral candidates in their last year. An appointment was typically an entire hour. In order to benefit from that weekly hour, the best thing to do was to write a draft of a section and submit it to him ahead of the appointment, so that his comments could be very detailed during the face-to-face discussion. However, even if one hadn’t had a chance to give him written drafts ahead of time, once could count on in-depth, valuable comments full of general perspective, while presenting new material and hypotheses to him. I have rarely encountered anyone who can focus on a conversation at one hundred percent, and be with you with his or her entire attention. Thus, it was not untypical for him to raise criticism and to see novel repercussions to one’s ideas and proposals, even if it was the first time that he was presented with those ideas.

In principle, no calls were directed to his telephone extension during an appointment. However, on rare occasions, when he expected an urgent call from someone in need, he allowed for such calls to be transmitted, and he would answer them briefly. Again, it was amazing to witness how completely his attention was directed to the phone call, but how fully he was with you afterwards; there was no second lost with trying to pick up the conversation again; he was able to literally continue where he had left off. He was wonderful with seeing connections between one’s ideas and present as well as past work, directing you not only to published or unpublished literature, but also to other students and scholars with whom he had talked and from whose ideas or observations and materials he thought you might profit (or who might profit from your proposals).

His generosity with respect to his time and energy also showed itself with respect to “intellectual property”: In your question, you referred to him as the father of modern linguistics. I think you are correct; however, he would deny this. He has stressed, time and time again, in print and orally, that modern linguistics has been a joint effort and joint success from its start until now, and that he has benefited from the work of his colleagues and students, just as they have benefited from his work. As you see, he has been, and still is, a role model in terms of not only the details of one’s work, but as an ethical and moral professional and as a generous human being, as well.

Q. What’s the next chapter in your career?

A.To expand in my research what I have done so far. I have specialized in Turkish syntax and morphology, and I have tried to contribute to theoretically informed linguistic typology. I am now trying to learn more about other Turkic languages and to establish a framework that captures not only the common traits among them, but also their differences, within a general and economical, and thus explanatory, model. I am currently involved in a couple of co-edited special journal issues, in the joint work on a monograph on partitives (the outcome of one of my Humboldt projects), and in writing a book on Turkish syntax, in addition to a couple of co-authored articles. I hope to be able to receive some external funding in the near future, which would make this multi-faceted plan more easily workable. As a matter of fact, I have just been informed that the Humboldt Foundation has issued a special invitation to me, “in recognition of [my] academic achievements and [my] contribution to academic collaboration with German specialist colleagues”, to spend up to three months in Germany for a further period of research.