Vice Chancellor and Provost Michele Wheatly led an information technology pep rally recently at a dinner for 94 potential School of Information Studies (iSchool) students. “You’ve all made a really great choice to come to the It Girls retreat because information is going to change the world,” she said. 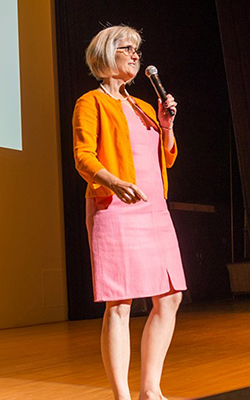 Vice Chancellor and Provost Michele Wheatly addresses the attendees at the IT Girls Retreat.

In addition to plugging the iSchool’s relevance to diverse career fields, Wheatly reminded the high school students to take pride in their achievements and talents.

“I’m wicked smart,” she said, and the girls responded, “That’s me!”

“I like to do challenging things,” and “I’m going to change the world,” Wheatly prompted. After each bold acclamation, the girls yelled, “That’s me!”

The dinner was part of the sixth It Girls Overnight Retreat, an iSchool initiative to build confidence, inspire and create a pathway for girls to study information technology. The two-day event also jumpstarts the networking process, creating meaningful connections among professional women, iSchool alumnae who work in the IT industry and the girls.

The program targets the significant gender imbalance in the science, technology, engineering and math (STEM) fields. While women hold nearly half of all jobs in the U.S. economy, they hold less than 25 percent of STEM jobs, according to Women in STEM: A Gender Gap to Innovation, a report by the U.S. Department of Commerce.

Ernst & Young, JP Morgan Chase, IBM and Synchrony Financial sponsored the retreat. Representatives of the companies, some of them iSchool grads and past It Girls retreat participants themselves, volunteered to lead workshops.

About 550 girls have attended It Girls retreats, and more than 80 of those girls decided to attend Syracuse University, according to Stephanie Worden, the iSchool’s Undergraduate Recruiting Specialist.

Worden told the girls they’re entering college at an exciting time of technology and information possibilities. “I’m interested to see what the next 16 years look like,” she said, recounting how much progress has been made since the attendees were born. “How will you influence it?”

Workshops offered the girls a taste of real problems they might tackle as IT professionals. Sessions introduced them to skills the iSchool emphasizes: public speaking, collaboration and brainstorming.

Girls showed their creativity in a workshop on wearable technology. Among their inventions: earrings that buzz when the wearer slouches; a head band that measure how much the wearer sweats and how much water she needs to drink; and an improved Apple Watch, featuring a flashlight; and more fitness-tracking options. 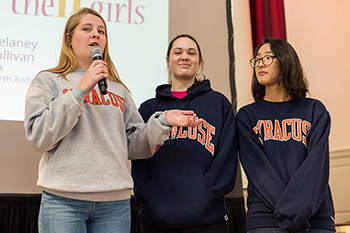 Participants share highlights of their time at the retreat during the closing event in Hendricks Chapel.

“Any job you’re going to get you’re going to need to understand technology,” said McKenzie Miller, a member of the inaugural It Girl cohort and a 2016 iSchool graduate who works as a technology advisor at Ernst & Young.

Rosaly Salcedo, a senior Information Management and Technology major and an IT Girl, said the retreat – and the school—can help students find their strengths. “Whatever your end goal is, know it, envisioning, get to it,” she advises.

The weekend also included entertainment and fun—notably the traditional sleepover at Archbold Gymnasium. By the closing event Monday, a speakout at Hendricks Chapel, many of the young women were eager to proclaim their places as new IT Girls.

“I already knew coding,” said one girl who hopes to work in the health field. “I wanted to find my own path. I think I found it by coming here.”