The College of Arts and Sciences is celebrating the appointment of Duncan Brown as the inaugural Charles Brightman Professor of Physics. 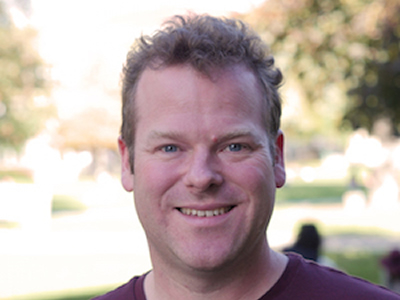 A world-renowned expert in gravitational-wave astronomy and astrophysics, Brown will be honored by Syracuse on Thursday, Oct. 20, in rooms 202-204 of the Physics Building. The program includes an induction ceremony at 3:30 p.m., followed by a presentation by Brown titled “Gravitational-Wave Astronomy: A New Frontier for Exploring the Universe.”

Among those in attendance will be Kent Syverud, chancellor and president of the University; Michele Wheatly, vice chancellor and provost; and Karin Ruhlandt, dean of A&S and Distinguished Professor of Chemistry.

The professorship has been made possible by a $1.4 million bequest to the Department of Physics by Joseph and Charlotte ’37 Stone, the latter of whom was Brightman’s daughter.Brightman taught in the physics department from 1916-1950.

“Duncan Brown epitomizes the tenacious, entrepreneurial spirit of Charles Brightman, who helped establish the University as a bastion of physics teaching and research,” Ruhlandt says. “Duncan exhibits consistent and outstanding leadership at all levels—with his skill and sustained service in the classroom, his proven track record in scholarly and creative work and his unwavering service to the global research community.”

A Syracuse faculty member since 2007, Brown played a leading role in the Laser Interferometer Gravitational-Wave Observatory (LIGO)’s historic detections of gravitational waves. Both detections, announced earlier this year, were caused by the collisions of two different pairs of black holes more than a billion years ago.   The detections provide the first direct evidence of gravitational waves, predicted by Einstein, a century ago.

Brown is an authority on finding gravitational waves with LIGO and then extracting the physics from these observations. 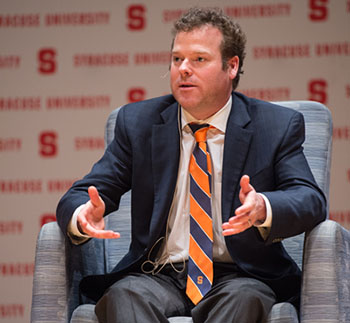 Brown participating in LIGO’s announcement of its first gravitational-wave detection.

“Duncan is a major leader in this field, which gives scientists a new way to sense cataclysmic events in the universe,” says Alan Middleton, professor and chair of physics. “He has developed algorithms that ‘hear’ signals from colliding massive objects, such as black holes and neutron stars, and his work with LIGO and the University’s Gravitational-Wave Group confirms Einstein’s vision of space and time as dynamic and interwoven. This sets the stage for new discoveries about how gravity and matter act under the most extreme conditions in our universe.”

As a result of his LIGO work, Brown is sharing in the receipt of both the Special Breakthrough Prize in Fundamental Physics and the Gruber Foundation Cosmology Prize.

His appointment also exemplifies a steadfast commitment to teaching and mentoring. He is proud of the fact that nearly half of Syracuse’s Gravitational-Wave Group, one of the largest, most diverse teams in the LIGO Scientific Collaboration, is made up of graduate students and undergraduates.

Also, he and Professor Stefan Ballmer are partnering with colleagues at California State University, Fullerton, to foster diversity in gravitational-wave astronomy. Their project, underwritten by a $937,000 grant from the National Science Foundation (NSF), helps underrepresented students succeed in Syracuse’s Ph.D. program in physics. “It’s forming a pipeline of talent between both institutions,” says Brown, whose work draws on physics, astronomy and information studies. “The implications for teaching and research are enormous.”

A fellow of the American Physical Society and Kavli Foundation, Brown has received a Cottrell Scholar Award from the Research Corporation for Science Advancement, a CAREER Award from NSF and a Meredith Professor Teaching Recognition Award from Syracuse. He is a sought-after conference presenter, the principal investigator of more than a dozen sponsored research projects and an accomplished teacher, mentor and author.

Brown earned a Ph.D. from the University of Wisconsin-Milwaukee. He joined Syracuse after working as a postdoctoral research associate in Kip Thorne’s group at Caltech.

“I am honored to be appointed the first Brightman Endowed Professor,” Brown says. “The position will help push my teaching and research in new directions. It also says a lot about the spirit of discovery at Syracuse.” 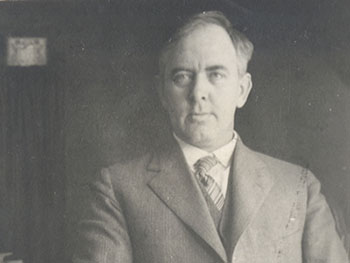 The Brightman Professorship is a three-year appointment that recognizes and supports early- to mid-career physicists. The professorship is named for the theorist whose teaching career included stints at Wesleyan University; Mount Holyoke College; and DePauw University, where he was the first professor with a Ph.D. in physics (earned from Clark University in Worcester, Mass.). At DePauw, Brightman designed courses in modern theory and alternating current theory.

Brightman’s daughter, Charlotte, was an alumna of A&S and Newhouse who, along with her husband, Joseph, gave generously to the University. They established the Stone charitable trust, which provided income to care for various family members. When the last beneficiary died, Syracuse received the remaining principal.