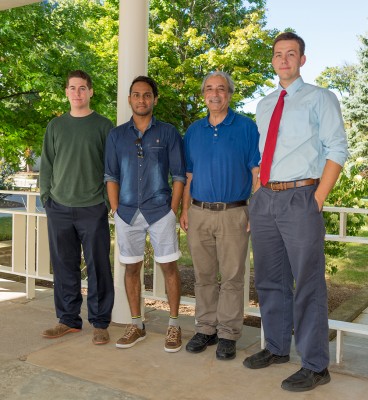 A team of graduate students from the Information Management and Telecommunications and Network Management programs at the School of Information Studies (iSchool) and from the College of Engineering and Computer Science have won the gold award in Phase I of the National Cyber Analyst Challenge (NCAC).

Twenty schools participated in the first phase of competition. The Syracuse team will now advance to the finals in October in Washington, D.C. The students are all members of the iSchool’s Information Security Club.

The challenge was an online contest, and a different format from how the club’s members were used to participating in cyber challenges.

“We typically participate in offensive-natured competitions, where teams defend their systems against hackers,” explains iSchool Assistant Professor of Practice Bahram Attaie, who serves as the club’s coach and advisor. “This competition was much more forensic based. Students were given tasks to carry out. For example, they were provided with a set of files and asked to look into them for anomalies or hidden information.”

The competition, a joint initiative between Lockheed Martin and Temple University’s Institute for Business and Information Technology (IBIT), provided the students with a valuable opportunity to analyze data from a real-world cyber incident, an experience often missing in typical academic coursework and capture-the-flag competitions.

This is the first time Syracuse’s Information Security Club has competed in NCAC and they were introduced to it by iSchool adjunct professors Dan Smith and Tim Van Waes, who are both cybersecurity specialists at Lockheed Martin.

“Dan and Tim have been terrific mentors for the students,” says Attaie. “They have spent many late hours to support our teams in competitions like these.

The gold award provides the team with $12,000 of funding, an industry mentor, valuable training sessions, and a trip to Washington, D.C., to compete in the final phase of the competition in the hope of winning $25,000. The final phase will consist of a live competition that will emphasize the skills necessary to be an accomplished cyber analyst.

Hartley credits the win, in part, to taking a graduate course in digital forensics (IST 602) with iSchool adjunct professor Mark Pollitt. Pollitt, who has a distinguished career as a military officer and FBI agent, instructs his students in proper forensic procedures, Hartley notes.

“Our Information Security Club has created a culture of learning here at the school, and cyber security is a huge draw,” explains Attaie. “You can’t be good at it unless you live and breath it, practice it on a regular basis, and the club and competitions like this one allow our students to do just that.”