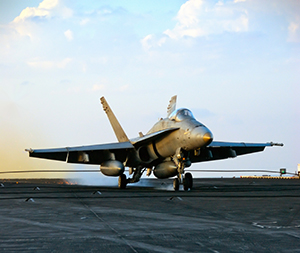 Landing an airplane on an aircraft carrier can be dangerous.

Landing a plane on an aircraft carrier is a dangerous maneuver. There’s only so much space to land, and ships are moving targets. Ships heave. They sway. They surge. They pitch, roll and yaw. Plus, airplanes move similarly in the air. Pilots have to resist these motions to stay steady while being pummeled by strong gusts of wind coming off the ocean. All of this adds up to a need for a better understanding of the swirling forces that engulf planes’ wings and make touchdown so perilous.

Assistant Professor Melissa Green, an expert in fluid dynamics at Syracuse University, along with Professor David Rival of Queen’s University, have been awarded a grant from the Office of Naval Research to study the topology of force production in unsteady flows around swept wings. This joint proposal will study the axial, vertical and lateral gust responses over a generic swept-wing body. 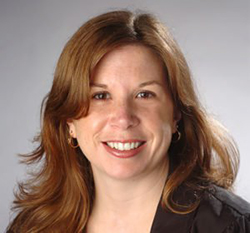 In her lab at the Syracuse Center of Excellence and the OTTER Lab at Queen’s University, Green’s and Rival’s research teams will conduct experiments to acquire time-resolved 3D flow fields, pressure, force and moment data on a model performing analogous surge, pitch and yaw motions underwater in an optical towing tank. The team will employ comprehensive Eulerian and Lagrangian analyses to reveal the full unsteady 3D flow structure topology, and will result in a description of how pressure/force distributions and moments depend on interactions with various gust waveforms.

Green says, “Air is a fluid, so the flow fields that we study in our water tank can be applied to the flow of air around airplane wings. It’s not overstating it to say that a better understanding of fluid dynamics could lead to advancements that would make flying and landing planes much safer for Navy pilots and sailors.”