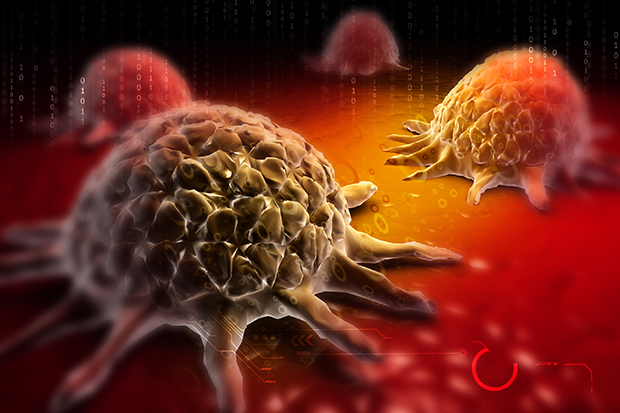 Three physicists in the College of Arts and Sciences are using a major grant to study the dynamics and interactions of cancer cells.

The trio, whose research focuses on theoretical soft condensed matter and biological physics, will investigate new collective mechanisms that establish and maintain tumor boundaries in breast and cervix carcinomas.

Carcinoma is a type of cancer that usually begins in the tissue of the skin or in the lining of certain internal organs and then develops out of control.

“Understanding the mechanisms that confine carcinoma cells to a primary tumor or conversely facilitate their escape is of key importance in cancer therapy,” Manning says. “In this framework, a confined tumor, in which cells retain the same neighbors, is solid-like. In contrast, malignant invasion, facilitated by cell rearrangement and escape from the primary tumor, can be modeled as a transition to a fluid-like state.”

She continues: “Our goal is to provide quantitative support for these ideas, to shed light on tissue behavior, cell segregation and cell escape. Ultimately, we want to develop a better method for identifying tumor boundaries and predicting when a cancer becomes invasive.”

Underpinning the project is what Manning labels a “paradigm-shifting conjecture”—that the transition from noninvasive to invasive tumors is governed by an unjamming, or solid-to-liquid, process. She and her colleagues plan to test their theory with new, active versions of a well-studied vertex model for confluent tissues and with fiber models for the extra-cellular matrix (ECM) surrounding the tumor.

“We will use our model to predict laws that govern cell motion in tissues,” says Marchetti, adding that techniques and ideas from soft matter and statistical mechanics can be used to describe such biological systems.

Adds Schwarz: “We know the mechanical properties of a tumor depend on single-cell parameters, such as cell shape, cell stiffness and active forces generated by cell crawling. The behavior of a tumor is also influenced by the surrounding environment, including the ECM, which is a network of biopolymers.”

She, Marchetti and Manning are collaborating with Professor Josef Kaes, a soft-matter physicist at the University of Leipzig (Germany), to develop methods for extracting important model parameters from experimental data from cancer cell lines and primary tumor samples.

In addition to developing tools to observe these processes more closely, the team will investigate how a cancer tumor regulates tissue stiffness and fluidity, and how cells escaping from a primary tumor boundary interact with the surrounding ECM.

“Although there is a physical barrier [called the basement membrane] that encloses most primary tumors, the boundaries are often maintained after the cells break through the barrier,” says Manning, who recently returned from France, where she received the Young Scientist Award from the Commission on Statistical Physics of the International Union of Pure and Applied Physics. “We think fluid-solid transitions may be the key to understanding what holds such tumors together, and we’ve developed a theoretical framework that, for the first time, explains fluid-to-solid transitions in such tissues.”

Cancer occurs when a normal cell mutates, or changes, but is unable to repair itself. The damaged cell keeps multiplying, and creates an abnormal growth of tissue called a tumor. Some tumors are cancerous; others are not.

“In a clinical setting, it’s important to identify not only tumor boundaries to guide surgical resection, but also mechanical biomarkers for cancer aggressiveness,” Marchetti says. “We will address these issues with ideas that are different from, and complementary to, ones being explored by traditional cancer biologists.”

Designed to foster participation in the burgeoning field of biophysics, the project will involve graduate students, undergraduates and postdocs, and will provide professional development opportunities for young scientists.

Manning, Marchetti and Schwarz are members of the Syracuse Soft Matter Program, housed in A&S’ Department of Physics. They also are active proponents of women in the STEM fields, as evidenced by a national conference they co-organized at Syracuse in January for undergraduate women in physics.

The BioInspired Institute focuses on leading-edge research in materials and living systems and trains students at the undergraduate and graduate level. When the United States faced a reckoning on racism and structural inequities, BioInspired’s faculty and staff asked, “How can…

From an early age, Leonardo Rivera ’22 had a fondness for animals and wildlife conservation. Growing up in tropical Puerto Rico, the biology major on a pre-veterinary track remembers investigating the habits of hermit crabs in the sand, watching as…