As the revolution took hold in Syria, Hani Sulieman parted ways with his family and began a dangerous drive to the airport, not knowing if he would ever see them again. The roads he traveled were haunted by snipers and bore the scars of conflict. When he arrived at the airport, his cab was stopped by an army garrison. They demanded to know his destination. He told them Egypt. As someone who was of an age to be drafted, it was far too big a risk to admit that his final destination was the United States to escape the increasingly dangerous situation and continue his electrical engineering degree at an American university. With palpable fear for himself and his family, he departed on the final flight from Aleppo International Airport. To this day, the airport has never truly reopened. 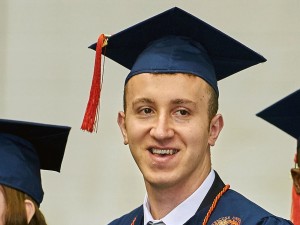 When Sulieman arrived in Syracuse three years ago he felt safe and free, yet out of place. Most of his knowledge of life in the U.S. was derived from American movies he’d devoured growing up. He moved in with his aunt and uncle. Prospects for continuing his education were slim. He couldn’t resume his studies because his immigration paperwork needed to go through a lengthy approval process and he couldn’t speak English fluently. As far as the paperwork goes, there was nothing else he could do but wait and hope. In the meantime, he set out to learn English on his own.

“My aunt would drop me off at Barnes & Noble from morning until night. I would read magazines. Time magazine is my favorite. I used to read it and write things down. It took six months for me to learn to speak the language.”

Sulieman says, “Both my parents are engineers so it is probably in my DNA, but really everything is related to engineering somehow. You can do so much with technology and the internet nowadays. Every day, engineers are creating something new.”

Today, he is relieved to call the U.S. home. And, in a happy ending suitable for an American movie, the parents he left behind in Syria joined him in Syracuse in time to see him graduate. His two sisters have also fled the chaos of their homeland—settling in Minnesota and Spain. While his next steps are uncertain for the time being, he takes solace in knowing that he and his loved ones have escaped a land in turmoil for a home of promise, equality and freedom, where opportunity abounds.