Professors Look to Geologic Past to Predict Future Environmental Conditions 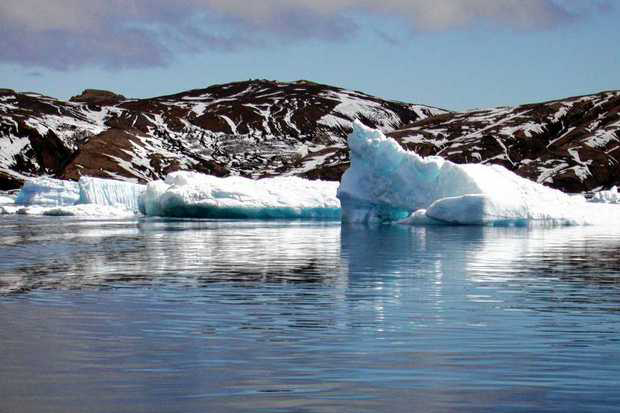 Earth scientists in the College of Arts and Sciences are studying the effects of seasonal precipitation and runoff, as well as temperature on fossil shells found on Seymour Island’s La Meseta Formation, off the coast of the Antarctic Peninsula.

Earth scientists in the College of Arts and Sciences are looking to fossil records for clues to future polar environmental conditions.

Linda Ivany, Scott Samson, Zunli Lu and Christopher Junium, all professors in the Department of Earth Sciences, have been awarded a two-year, $312,182 grant from the National Science Foundation (NSF) to study the relationship between elevated temperatures and precipitation in Antarctica tens of millions of years ago. 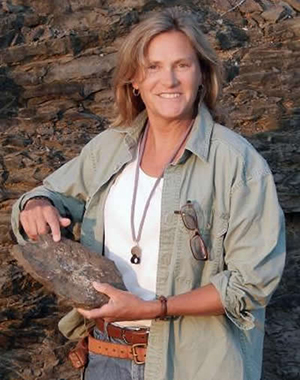 One of the department’s highest-funded collaborative projects to date, it will enable the quartet to develop new and detailed paleoclimate records about the past in hopes of more accurately predicting global climate patterns.

“We’re focusing on Antarctica during the Late Eocene epoch [approximately 40 million years ago], a time of relative global warmth,” says Ivany, the project’s principal investigator. “We want to see how the seasonality of the temperature and amount of rainfall in that ancient coastal setting may provide clues to what we can expect in a future warmer world.”

Driving their work is the hypothesis that near-monsoonal conditions occurred in the Earth’s polar regions millions of years ago, when oceans were considerably warmer. Ivany and her colleagues will test their hypothesis using the chemistry of fossil shells—specifically, shallow marine bivalves.

“If our hypothesis is true, we can expect the high latitudes to get stormier, causing shipping lanes to become more hazardous and fragile marine ecosystems, which are used to continually cold temperatures, to suffer, as coastal Antarctic summers get progressively warmer and less salty,” says Ivany, an expert in paleoclimatology and paleobiology. “We need more information from the geologic record, when Antarctica was warmer, to make responsible decisions about environmental economics and related policy issues.”

A monsoon is a major wind system, often accompanied by excessive precipitation, that reverses its direction approximately every six months. “That’s why we need to get down to seasonal resolution, rather than the long-term averages that most paleoclimatologists deal with,” she adds.

The Late Eocene was a unique chapter in the planet’s history. Following a period of extreme warmth, due to high levels of carbon dioxide in the atmosphere, the Late Eocene witnessed gradually cooler, dryer conditions. A shallow circumpolar current, brought on by the northward movement of South America, likely led to Antarctica’s isolation.

The situation was exacerbated by diminishing levels of carbon dioxide, resulting in cooler temperatures and the eventual formation of the South Polar Ice Cap. 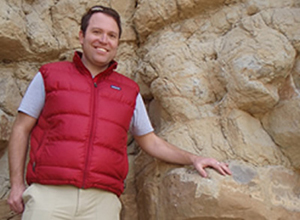 “The climate transition from the warm, equable world of the Early Eocene to one in which continent-scale ice sheets blanketed the poles is reasonably well-known, based on sediments from the low and mid-latitudes,” says Junium, a sedimentary and organic geochemist. “Less is known, however, about the timing and magnitude of cooling on Antarctica, mostly because potential sedimentary archives are inaccessible or are covered by ice.”

He and Ivany believe that Antarctica may help them understand how the Earth’s climate system responds to increased carbon dioxide. Hence, their team is studying the effects of seasonal precipitation and runoff, as well as temperature on fossil shells found on Seymour Island’s La Meseta Formation, off the coast of the Antarctic Peninsula.

Unique to their work is an attempt to resolve differences in temperature and rainfall, as preserved in 40-million-year-old fossils. By studying annual growth rings in the shells of bivalve mollusks, Syracuse researchers hope to estimate changes in temperature and salinity that occurred seasonally during their lifetimes. One of Ivany’s Ph.D. students, Emily Judd, will examine the chemistry of shells formed during the winters and summers, with an eye toward assessing conditions during ancient warm-climate summers.

In addition to reconstructing ancient climate, Syracuse researchers hope to use the chemical composition of fossils to clarify the timing of climate change. Samson, a geochemist who is also the department’s associate chair, says that studying Antarctica’s cooling and drying patterns may shed light on those in other parts of the world. 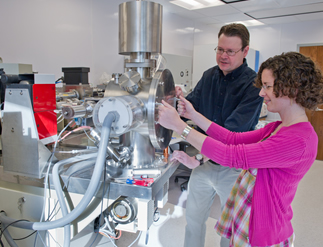 Scott Samson uses a mass spectrometer to determine the age of fossil shells.

“Age uncertainty is one of the biggest problems with Seymour Island’s climate record,” he says. “We hope to rectify this with our new mass spectrometer, which will measure strontium isotopic ratios in samples that we collected a few years ago.”

Strontium is an element similar to calcium, found in seawater and shells. Scientists have determined that, over the past 40 million years, the ocean has contained a unique ratio of two strontium isotopes. (Isotopes are atoms of elements with varying numbers of neutrons.) Because neither isotope decays radioactively, the ratio remains unaltered in marine fossils.

“We can determine the age of shell fossils by extracting the strontium and comparing the ratio of the two isotopes with ratios known to have occurred [in the ocean] in the past,” Samson adds. “We do this in a ‘clean room’ on campus, whose air is a thousand times purer than that outside, and involves a state-of-the-art mass spectrometer, which enables us to weigh atoms.”

Lu is a geochemist also interested in Antarctic sediments. He says that, throughout history, the Earth has fluctuated between two climate states: Greenhouse and Icehouse. Each state lasts for millions of years, but should not be confused with glacial and interglacial periods, which are shorter and exclusive to the Icehouse state. 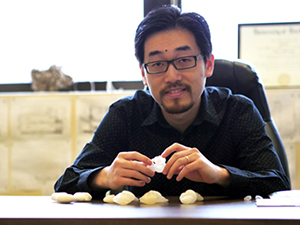 “The shift from the early ‘Greenhouse’ climate to the present-day ‘Icehouse’ one is marked by glaciation in the polar regions,” he says. “All of this is reflected in the chemistry of fossil skeletons and minerals—isotopes of oxygen and carbon, as well as ratios of magnesium and calcium—found in ocean sediments in Antarctica. This climate transition is the most important one since the extinction of the dinosaurs, and, tens of millions years later, we’re still feeling its effects.”

The NSF grant award supports an international team of scholars; the training of multiple graduate students; and a public museum exhibit, designed to educate children about the Earth’s climate.