Nearly all U.S. regions stand to gain economic benefits from power plant carbon standards that set moderately stringent emission targets and allow a high level of compliance flexibility, according to a new study co-authored by Charles Driscoll, University Professor of Civil and Environmental Engineering in the College of Engineering and Computer Science. 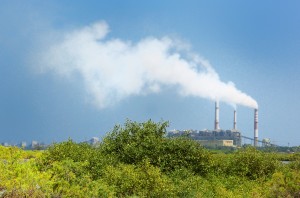 The study broke down the benefits of power plant carbon standards by subregion for the entire U.S.

The study’s lead author was Jonathan Buonocore, research associate and program leader at Center of Health and the Global Environmental, Harvard T.H. Chan School of Public Health. It also included scientists from Resources for the Future and the Harvard Forest, Harvard University, as a project of the Science Policy Exchange.

“We found that the health benefits would outweigh the estimated costs of the carbon standard in our study for 13 out of 14 power sector regions within five years of implementation—even though we only looked at a subset of the total benefits,” says Buonocore.

“With the full range of climate, health and ecosystem benefits taken into account, we would expect that the net benefits would be even larger and that the benefits would outweigh costs in all regions within a year or two of implementation,” adds co-author Dallas Burtraw, Darius Gaskins Senior Fellow at Resources for the Future.

Power plant carbon standards are aimed at curbing carbon dioxide emissions from the power sector to help address climate change. Depending on how the standards are designed, emissions of secondary pollutants such as sulfur dioxide, nitrogen oxides and particulate matter may also be reduced as a co-benefit of the policy—leading to improved air quality and associated health benefits such as fewer premature deaths, heart attacks and hospitalizations from respiratory and cardiovascular impacts.

The study analyzed the anticipated health co-benefits of a power plant carbon standard that would achieve a 35 percent reduction in carbon dioxide emissions by 2020 through cleaner fuels, energy efficiency, emissions trading and other measures. In a previous study, the researchers projected that approximately 3,500 premature deaths and hundreds of heart attacks and hospitalizations would be avoided in the U.S. each year as a result of this carbon standard. In this new study, the researchers calculated the economic value of those health co-benefits for the nation as a whole by county. Then they compared those benefits to costs that they projected for 14 commonly used power grid regions to estimate net benefits by region.

The researchers then used three different sets of economic assumptions to estimate the cost of the carbon standard for each of the 14 regions. The results show that the highest costs of $1.5 to $3.6 billion per year are projected for the Midwest, Mid-Atlantic and Southeast regions under the central cost case. Those same regions also have among the greatest benefits, ranging from $1.7 billion to $5.6 billion. The largest net benefits occur in the Central Mid-Atlantic region.

“Our results suggest that net economic benefits from power plant carbon standards tend to be greatest in highly populated areas near or downwind from coal-fired power plants that experience a shift to cleaner sources with the standards,” says Driscoll.

The power plant carbon standards analyzed in this study are similar to, but not the same as, the Clean Power Plan introduced by the U.S. Environmental Protection Agency (EPA) on Aug. 3, 2015. The standard in the study would achieve a 35 percent reduction in carbon dioxide emissions from the power sector from 2005 levels by 2020. The costs and benefits were calculated as the difference from a business-as-usual case based on 2013 energy demand projections from the U.S. Department of Energy and Energy Information Administration. The U.S. EPA Clean Power Plan aims to achieve a 32 percent reduction from 2005 levels by 2030 and uses a business-as-usual case with updated energy demand, natural gas prices and renewable and energy efficiency assumptions.

Visit http://journals.plos.org/plosone/ to access the study, including maps of benefits and costs.