Geoffrey Vaartstra ’17, a mechanical engineering major in the College of Engineering and Computer Science, has been named Syracuse University’s 2016 Astronaut Scholar. Each year, the Astronaut Scholarship Foundation selects one student who is pursuing a degree in science, technology, engineering or math to receive the prestigious scholarship at each of its participating universities. 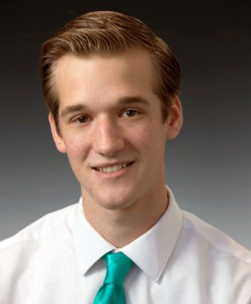 Vaartstra’s academic interests lie in the development of advanced materials for water and energy applications, specifically water purification and energy systems. He plans to pursue a Ph.D. in mechanical engineering after graduation.

As an undergraduate, Vaartsrta has been conducting nanotechnology research with Assistant Professor Shalabh Maroo in which he investigates water transport phenomena in the sub-nanometer pores of zeolites toward creating an efficient water desalination membrane, and has published and presented an American Society of Mechanical Engineers conference paper as the first author. He is planning to conduct research with Maroo in his senior year on enhanced pool boiling surfaces with nanopattering for his capstone project awarded by the Renée Crown University Honors Program.

Vaartstra was motivated to advance water purification following trips to Mexico in which he visited cities with unsafe drinking water. “Having lived my entire life in the United States, where potable water is always as close as the nearest faucet, the first-hand experience of having to pay for every sip of such a basic human necessity struck me profoundly,” he says. “I have listened to my friends from Puebla talk about the related social impacts, such as high levels of childhood obesity and a range of common health problems among poor communities in Mexico.”

This past spring, he studied abroad in Santiago, Chilé, where he evaluated the engineering challenges that local communities face. Vaartstra was also recognized as an Honorable Mention for the Goldwater Scholarship.