The honors keep rolling in for the Gravitational Wave Group in the College of Arts and Sciences.

Based in the Department of Physics, the group’s 22 members are among the recipients of the Special Breakthrough Prize in Fundamental Physics and the Gruber Foundation Cosmology Prize, in recognition of their contributions to the historic detection of gravitational waves. The group shares the prizes with more than a thousand other scientists, engineers and students from around the globe.

“We are extremely proud to have contributed to the detection of gravitational waves,” says Peter Saulson, the Martin A. Pomerantz ’37 Professor of Physics. “LIGO’s observations provide an essential new tool for physics and astronomy. We are grateful to the leadership of Syracuse University for supporting our efforts over the years.”

The Special Breakthrough Prize comes with a $3 million award, a third of which is being distributed among the founders of the Laser Interferometer Gravitational-Wave Observatory (LIGO): Caltech’s Ronald W.P. Drever and Kip Thorne and MIT’s Rainer Weiss. The remaining $2 million is being split among 1,012 other contributors to the discovery. Syracuse faculty, students and researchers expect to share approximately $41,000.

The Special Breakthrough Prize is funded by a grant from the Milner Global Foundation, named for the Russian billionaire Yuri Milner.

The Cosmology Prize, which is co-sponsored by the Gruber Foundation and the International Astronomical Union, comes with $500,000 that is being divided among Drever, Thorne, and Weiss.

An expert on gravitational-wave astronomy and theoretical astrophysics, Brown says LIGO’s discovery opens a new window onto the universe. “The reason this is so exciting is that, in addition to being the first detection of gravitational waves, it is the first time we have directly seen black holes. And we’ve seen two colliding into each other,” says Brown, who works on detecting and studying the physics of these waves. “We’ll be able to look at the universe in a way that we never have before, getting a better idea of where it has come from and where it is going.”

The detection, which was announced in February, coincides with the centennial of the publication of Einstein’s general theory of relativity. “Einstein reimagined Newton’s conception of gravity,” says Ballmer, a member of the Advanced LIGO design team who facilitated the detection by bringing the experiment’s instrumentation to a peak performance level. “Rather than treating gravity as a force acting across space, Einstein saw gravity as a property of space and time [also known as ‘spacetime’]. When violent events occur far across the universe, gravitational waves carry the news at the speed of light.”

On Sept. 14, 2015, LIGO’s twin observatories in Livingston, La., and Richland, Wash., picked up the fleeting vibration of a gravitational wave, equal in size to a fraction of the diameter of a subatomic particle. Over the next five months, members of the thousand-strong LIGO Scientific Collaboration, which Saulson co-founded, confirmed that the waves originated more than 1.3 billion years ago, during the final fragment of a second between the merger of two black holes. The result was the formation of a more massive single black hole.

“Gravitational waves carry information about their dramatic origins and the nature of gravity that otherwise cannot be obtained,” says Saulson, a 35-year veteran of LIGO. “When the two black holes collided, they did so at half the speed of light. The energy given off in gravitational waves was larger than that radiated in light from all the stars in the universe.”

The lead commissioner at LIGO Hanford in Washington, Ballmer was in the control room the night before the detection. “When I returned the next morning, there was a buzz in the air,” he says. “I’ll never forget staring at the first plots, getting goosebumps.”

Although the Earth is awash in gravitational waves, detecting them is another matter. In fact, last fall’s detection—no more than a faint chirp, when translated to sound—marked the culmination of more than four decades of research.

The discovery owes its success to a technique called interferometry. “Each LIGO detector is a giant laser interferometer,” Brown says. “The detector simultaneously sends light signals down long perpendicular tunnels and then marks their arrival back at the point of origin. The arrival times should be identical, unless a gravitational wave has altered the light waves’ journeys.”

Brown not only developed the key detection algorithms, but also marshaled much of the computing hardware for LIGO’s discovery. 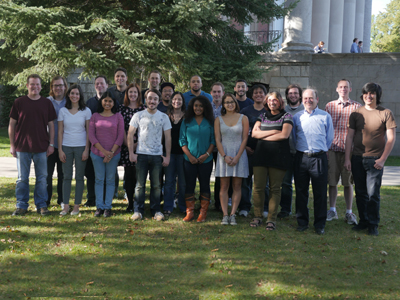 Members of the Gravitational Wave Group

Syracuse has a long history of gravitational-wave research, starting with Einstein assistant Peter Bergmann, who founded the nation’s first general relativity research group on campus after World War II. Since then, the University has attracted other stellar researchers, including Professor Emeritus Joshua Goldberg G’50, G’52, who supported the first international conference on general relativity; Roy Kerr, a mathematician who first described rotating black holes; and Abhay Ashtekar, Lee Smolin and Professor Emeritus Rafael Sorkin, all pioneers in the study of quantum gravity.

Weiss, who worked out the basic ideas of LIGO as part of a physics course he taught at MIT, also has ties to Syracuse, albeit indirectly. In addition to being Ballmer’s Ph.D. supervisor, he was a postdoctoral mentor to Saulson and Gabriela González G’95, spokesperson for the LIGO Scientific Collaboration and Saulson’s first Ph.D. student at Syracuse.

“By 1972, ‘Rai’ Weiss had completed an in-depth analysis of the many sources of noises that an interferometer would encounter, and had developed a detailed design for a detector that could surmount those noises,” Saulson says. “It became the blueprint for decades of R&D that led to LIGO.”

Syracuse’s Gravitational Wave Group encompasses professors, research scientists, postdocs, graduate students and undergraduates, all with a broad range of backgrounds and experiences. Saulson says that some of the researchers, including Brown and Ballmer, are already knee-deep in the next phase of LIGO.

“They will help us perform experiments with energies, masses and speeds that are inaccessible in a lab on Earth,” says Saulson, adding that Syracuse boasts one of the largest research groups in the LIGO Scientific Collaboration. “It’s history in the making.”