Physicists in the College of Arts and Sciences are close to figuring out how to make biologically inspired robots that can change shape according to their environment. 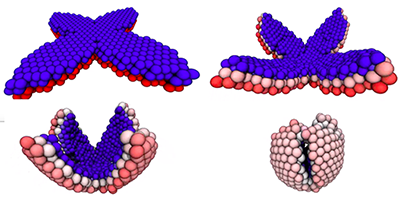 Sheets of liquid droplets can spontaneously and reversibly change their shape.

A team of researchers, led by Mark Bowick, professor of physics and director of the University’s Soft Matter Program, has demonstrated how sheets of liquid drops can spontaneously and reversibly change their shape. Their findings are the subject of an article in Physical Review Letters (American Physical Society, 2016) and a Synopsis at http://physics.aps.org.

The article is co-authored by Bowick; Jennifer Schwarz, assistant professor of physics; Tao Zhang G’15, a postdoctoral researcher at the University of Pittsburgh and a Ph.D. alumnus of Syracuse; and Duanduan Wan, a Ph.D. candidate at Syracuse.

“Just as robots are able to pick up things and then put them down [a behavior known as reversibility], we’ve designed and modeled a three-dimensional network of water droplets to do the same,” says Bowick, an expert in condensed matter theory and mathematical physics. “Through biological self-assembly, we’ve been able to create wild and wonderful shapes, like the petals of a flower or the body of a snake, starting with entirely flat layers. Reversibility is engineered by introducing an osmotic interaction to the network.”

The implications for soft robotics—“a first-generation soft robot that can grab its load, squeeze into a tight space and unload, repeatedly,” Bowick adds—are significant, possibly surpassing the capabilities of conventional hard robotics.

Underpinning such work is self-assembly, the process by which smaller components organize into ordered structures. Drawing on previous experiments, in which biologists have shown how micron-sized droplets self-assemble into various shapes, Bowick and his colleagues devised a theoretical emulsion by immersing water droplets in oil. The result was something like mayonnaise, but with droplets of water instead of oil.

Conjoined by permeable lipid molecules, the droplets formed a tissue-like structure. Salt was then added to create osmotic pressure, causing the sheets of droplets to fold into various three-dimensional structures.

“By swelling some of the droplets and shrinking others, the droplets morphed in size, and the entire network shifted its shape,” Bowick says. “Such shape-shifting is the next important step toward osmotic robotics in this system.”

Syracuse researchers focused their attention on a four-petal design that spontaneously folded to produce a hollow sphere. They also demonstrated how to reverse the shape change by placing the sphere within a liquid with a higher solute concentration.

“The droplets in the folding sphere lost water and shrank, causing the hollow sphere to unfold back to its original shape,” Bowick adds. 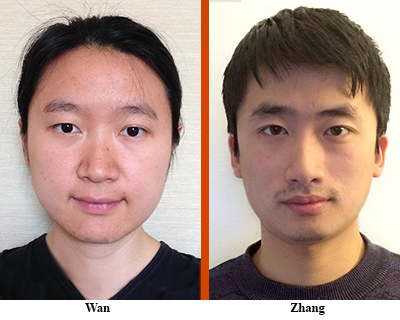 The renowned physicist says the experience has been “thoroughly collaborative,” and included three years of “intense” weekly meetings. He reserves special praise for Wan and Zhang: “They made it possible by their dedication to this long and ambitious project.”

Based in the Department of Physics, members of the Soft Matter Program explore the science of easily deformable matter, including liquids, colloids, polymers, foams, gels, granular materials and various biological materials. The program is co-organizing a multinational conference titled “Active and Smart Matter: A New Frontier for Science and Engineering,” running June 20-23.