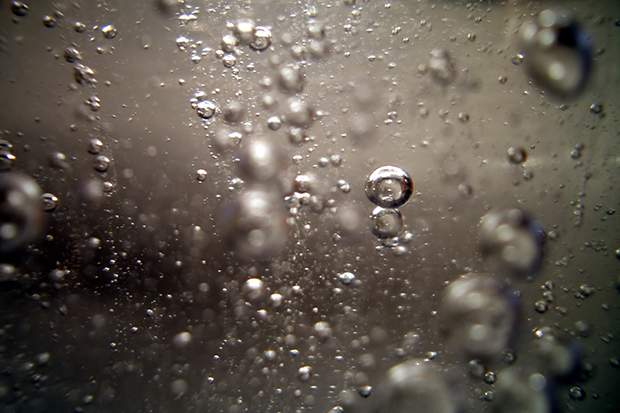 Using a focused laser beam, Shalabh Maroo’s group has managed to hit the pause button on the boiling process

Gather your patience and put the old “a watched pot never boils” saying to the test. The experience might rival watching paint dry, but of course the water will eventually begin to boil. When it does, you’ll see a flurry of bubbles form and quickly rise to the surface of the water. Once it kicks in, it builds at a furious pace and quickly creates a roiling cauldron on your stovetop. Time to add the pasta.

People have been boiling water to make dinner for ages, but it is also used in our refrigerators and even in the international space station as a method for cooling its systems. Ninety percent of all electricity in the United States is generated with steam turbines that require boiling to make the steam. With so many uses and over five decades of research, it is hard to believe that there are any stones left unturned in our understanding of boiling. Yet, as with all things, there is always room to learn more. The formation of bubbles in boiling is not completely understood.

The boiling process is largely driven by the dynamics of a very thin liquid film present at the base of each vapor bubble. Researchers have always found it challenging to study this area in the real world simply because it’s so hard to get a good look at. Bubbles form in unpredictable locations during boiling, and once they do they are fleeting—leaving the heated surface immediately. 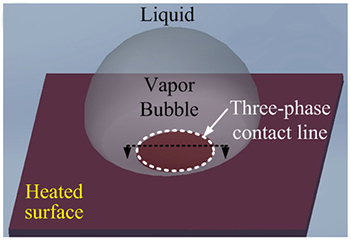 Until now. Using a focused laser beam to essentially hit the pause button on boiling, Assistant Professor of Mechanical and Aerospace Engineering Shalabh Maroo’s research group and collaborators at the National Institute of Standards and Technology and Rensselaer Polytechnic Institute have created a single vapor bubble in a pool of liquid that can remain stable on a surface for hours, instead of milliseconds.

This method gives researchers the time necessary to microscopically study vapor bubbles and determine ways to optimize the boiling process—maximizing the amount of heat removal with a minimal rise in surface temperature. Maroo envisions that it will also open the door for advancements in many heat transfer systems.

“With this technique, we are able to analyze the fundamentals of boiling,” says Maroo. “The new understanding is going to help researchers design surface structures to achieve desired heat transfer, accurately predict as well as enhance boiling in outer space, where lack of gravity causes bubbles to stay stationary on a heated surface, and create next-generation technology for thermal management in electronics.”

Maroo’s work has been published in its entirety in Nature Publishing Group’s high-impact journal, Scientific Reports. Within, Maroo elaborates on his methods and scientific achievements of this research, which include the formation and analysis of a steady state bubble on hydrophilic (water-loving) and hydrophobic (water-repelling) surfaces with degassed and regular (containing dissolved air) water; in-situ imaging of the contact line region to measure the contact angle of a vapor bubble and analysis to determine the upper limit of heat transfer coefficient possible in nucleate boiling, which is obtained using experimental measurements of the microlayer (the thin liquid film).

This research is supported by the National Science Foundation. An Zou, who was Maroo’s Ph.D. student and first author of the published paper, successfully graduated with his Ph.D. and is currently a post-doc at University of Michigan.