School of Information Studies (iSchool) Assistant Professor Bryan Semaan has been recognized with the Robert Benjamin Junior Faculty Research Award. This award was established by iSchool Professor Emeritus Robert Benjamin to recognize outstanding research by a junior faculty member. It provides course relief and funding to help the recipient advance his or her research program. 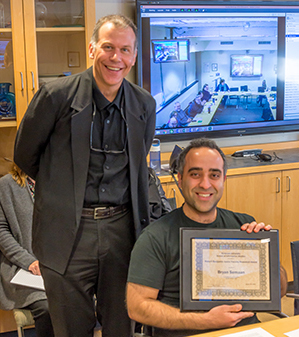 Semaan studies how and when information and communications technologies are used in critical civic contexts. These include refugee migration and resettlement, veterans’ transition back into civil society, political communication, and crises such as political uprisings and natural disasters. He integrates qualitative, quantitative and computational methods to understand these issues, and employs design science methods to build tools and environments that support communications in the public sphere.

“Bryan’s research is having a great impact in his field and on the individuals and communities in transition that benefit from his work,” says iSchool Associate Dean for Research Jason Dedrick. “He is having an equally great impact on the iSchool through his intellectual contributions, deep concern for his students and his contagious enthusiasm for the school.”

Semaan’s research has been recognized for its contribution to the field of human-computer interaction (HCI). His co-authored paper “Designing Political Deliberation Environments to Support Interactions in the Public Sphere” was named a Best Paper at the prestigious ACM Conference on Human Factors in Computing Systems in 2015. His work also has been published in top conferences such as the ACM Conference on Computer-Supported Cooperative Work and the SIGCHI Conference on Human Factors in Computing Systems.

His research goes beyond studying communities in transition. He also identifies design opportunities, policies and infrastructure initiatives to improve the lives and support the livelihoods of these individuals and communities. This combination of scholarly excellence and broader impacts exemplifies the goals of the Junior Faculty Research Award, and reflects the contributions and generosity of Professor Emeritus Benjamin.

Interim Dean Jeffrey Stanton presented the award to Semaan at a faculty meeting. The honor has been given four times previously: to Stanton in 2003, the year it was established; to former Associate Professor Scott Nicholson (2005); to Associate Professor Carsten Oesterlund (2008); and to Assistant Professor Yang Wang (2014).