Three personal passions drive graduate student Taylor Davis-Van Atta’s pursuits at the University, and they triangulate the path he is carving for his future professional life through the study of librarianship at the School of Information Studies (iSchool). 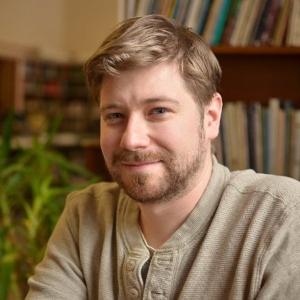 Davis-Van Atta, who worked as a public services assistant at Bird Library’s Special Collections Research Center this semester, began his studies in library science at the iSchool in August. The Helen Benning Regnier Scholarship recipient combines graduate studies, his library job and roles as a music-events producer and the founding editor of an independent arts journal, Music & Literature. He envisions incorporating his music, publishing and library interests into unique events that can be held on campus and in conjunction with community organizations while he’s attending Syracuse.

He also wants to continue that multi-layered, multi-disciplined type of career when he graduates, and believes the library profession is just the kind of diverse field that will let him do so. “I’m trying to feel my way toward a career path where my background in the humanities and publishing can be applied in a library setting, and that’s really leading to a lot of interesting possibilities,” Davis-Van Atta explains.  The school’s LIS program has permitted him to recognize “some common ground between the field of librarianship and the field of nonprofit arts publishing, especially here in the States where, in this globalized era, we might tend to think we have access to everything, that everything is at our fingertips. That’s really not at all true; libraries are working to dissolve that myth in practical ways and truly provide greater access to the world,” Taylor explains. “This is a mission shared by Music & Literature, on both the local and global scale.”

Davis-Van Atta grew up in Minneapolis, where his lifelong enthusiasm for violin performance led him to study at the Lawrence Conservatory of Music. He next graduated from Kingston University with degrees in literature and writing, then moved to Vermont to pursue a master’s degree at the Vermont College of Fine Arts.

While there, he interned at Graywolf Press, a small independent publishing house, then took an assistantship at Dalkey Archive Press before eventually accepting a full-time job at VCFA’s Library, working with Syracuse University alumnus James Nolte as his supervisor. That connection fueled Davis-Van Atta’s interest in obtaining a library degree, he said. “[Nolte] strongly encouraged me to look at Syracuse as an option. Syracuse was responsive to Music & Literature and other projects I had done, and really understood that my background could be practically applied to librarianship—hopefully in innovative ways. Other places didn’t necessarily respond in that same way.”

Despite pursuing an intensive work and library-studies track, Davis-Van Atta is maintaining his musical and publishing interests through his roles as the publisher and co-editor of Music & Literature. The nonprofit, volunteer-run organization is devoted to preserving, publishing and promoting the work of underrepresented artists from around the world. Its editors and staff, who are scattered around the U.S. and Europe, work together virtually and digitally to publish two issues of the journal each year and host a number of launch events and concerts in major cities around the globe, he says.

“The journal is up and-coming. It’s been featured on NPR and elsewhere, but it’s not in itself a career, not a money-making venture,” he notes. “It has always been a project where the work takes place between 9 at night, after the family goes to sleep, and 2 or 3 in the morning. That’s true for everybody on staff; we all teach, have day jobs, so for all of us, it’s that sort of labor of love that’s fun to do at the end of the day.” 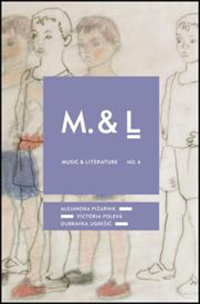 The cover of the latest issue of Music & Literature

Davis-Van Atta’s interests in publishing and librarianship have evolved together, leading to a perspective that “All of this activity is a single personal project in a way; the coursework informs the publishing practice, and the skills I’ve gained in publishing are immediately applicable and relevant to my studies,” he says. He is striving to incorporate his experiences and interests to the projects assigned in class.

“At this point, I’m trying to reach out and learn as much as I can about what Syracuse and other academic library systems are doing in the realm of publishing, digital scholarship and the humanities, and I hope I can help find new ways of pushing the field into the future. Librarianship is experiencing a dynamic moment; that’s what’s so exciting about it. There are opportunities to incorporate diverse sets of experiences—in the classroom and on the job. It’s great to a find myself in a community that embraces its diversity of backgrounds, where people are trying to apply their personal passions to a career.”

For the longer term, this applies to his future librarianship career too, Davis-Van Atta recognizes. “It will be interesting to see what role, if any, the publication itself plays in my future career. I suspect it will need to evolve as well. As I start to build a career, I’m certainly looking for organizations and institutions that respond to the Music & Literature project as well as the portfolio of library-based projects I’m building. It’s only natural to look for a place where the journal and the live arts programming around it can further enrich the community I’m serving as a librarian.”