A discovery by scientists in the College of Arts and Sciences has been named one of the Top 10 Breakthroughs of the year by Physics World magazine.

The Top 10 is chosen by a panel of Physics World editors and reporters. Qualified research must be of fundamental importance, represent a significant advancement in knowledge, demonstrate a strong link between theory and practice and be of interest to all physicists. 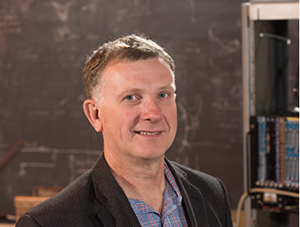 The accolade is the latest in a series for the team, putting to rest a 51-year-old mystery, in which American physicists Murray Gell-Mann and George Zweig independently proposed that all baryonic matter is composed of three quarks, or four quarks and an antiquark known as a pentaquark. While many three-quark baryons have been found, the pentaquark sighting is a first.

“This discovery explains not only how protons and neutrons are bound together, but also how matter is constituted,” says Alan Middleton, professor and chair of physics. “Pentaquarks force us to rethink how atomic nuclei behave under the most extreme conditions, from the super-dense Early Universe to neutron stars. It’s a milestone for particle physics in general.”

The discovery occurred at the European Organization for Nuclear Research, also known as CERN. Based in Geneva, Switzerland, CERN is home to the Large Hadron Collider (LHC), the biggest, most powerful particle accelerator in the world. Each year, thousands of scientists and engineers flock to CERN, in hopes of better understanding the makeup of the universe.

Among them are some 800 scientists—including a team of 20 Syracuse researchers, headed up by Stone—who are involved with the LHCb experiment. (The “b” stands for “beauty,” which is a type of quark found in protons and neutrons. While absent in today’s universe, b quarks were prevalent after the Big Bang, nearly 14 billion years ago, and have been generated extensively by LHCb.) The LHCb team uses the accelerator to fling particles together to see what happens. 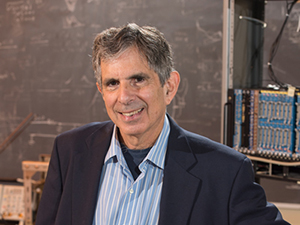 “Energy is sometimes converted into heavy particles that are not normally found in nature,” says Skwarnicki, a fellow of the American Physical Society (APS). “By examining the debris from these high-impact collisions, we’re able to learn more about the building blocks of matter and the forces controlling them.”

Also an APS Fellow, Stone is a Distinguished Professor who says the pentaquark discovery puts a fine point on quantum chromodynamics, which helps explain how quarks behave inside protons and other particles.

“We’re recreating the first millionth of a second of the Universe,” Stone says. “After the Large Hadron Collider creates proton-proton collisions, the LHCb detector uses a powerful magnet to cause the paths of charged particles to curve, with positive and negative particles moving in opposite directions. It’s through this curvature that we calculate the momentum of the particles. Their identities are then established with other devices, which deduce their mass by making velocity measurements.”

Jurik and Zhang are indicative of the University’s commitment to research training. In fact, both of them instigated the pentaquark project and wrote the code for the analysis. Zhang then presented the group’s findings at CERN. “I am proud to have come up with a model that has been proven mathematically and is essential to the project,” he adds.

Scientists believe that pentaquarks have two kinds of internal structures: one with all the particles tightly bound in a spherical system, left, and one in which a meson, shown in blue, is weakly bound to a proton, in orange, right. (Illustration by the American Physical Society/Carin Cain)

The pentaquark discovery probably would not have happened without an LHCb paper that Skwarnicki published in April 2014, confirming the existence of a tetraquark known as Z(4430), containing two quarks and two antiquarks. The paper was the LHCb’s most quoted one of the year, and established a prototype for an analysis method later applied to pentaquarks.

Around the same time, Stone and Zhang published an LHCb paper in which they suggested that another particle, called f0(980), was not a tetraquark, as originally thought, but was a meson, with two quarks.

“All convincing tetraquark and pentaquark candidates have a heavily charmed quark-antiquark pair inside them,” Skwarnicki says, adding that charm quarks are among the most massive of all quarks.

“A lot of different quarks are created by the LHC, before they fall apart or decay into other forms,” says Stone, who spends an average of three months a year at CERN, working on LHCb. “Our goal is to catch these b quarks, which are usually part of some baryon [with three quarks] or meson [three quarks and an antiquark], and to analyze their decays.”