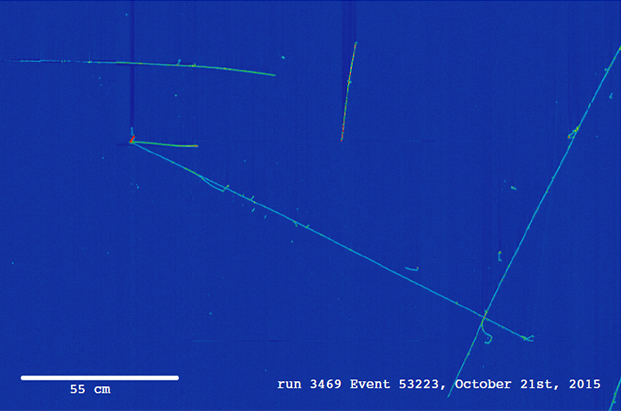 Physicists in the College of Arts and Sciences are playing a key role in the ongoing study of neutrinos, one of the universe’s smallest, most elusive particles.

Mitchell Soderberg, assistant professor of physics, is leading a team of University researchers involved with a multinational experiment called MicroBooNE. Short for “Micro Booster Neutrino Experiment,” MicroBooNE is based at the Fermi National Accelerator Laboratory (Fermilab), near Chicago, where more than 100 participating scientists are expected to study the properties of neutrino interactions. On Oct. 15, they hit pay-dirt, observing MicroBooNE’s first neutrino interaction.

“Because neutrinos have no charge and very little mass, they rarely interact with other particles,” says Soderberg, who studies the behavior of neutrinos. “In fact, most of them pass through the Earth without ever being disturbed or detected. They do occasionally, however, collide with a single atom. When that happens, we can study the interaction to learn more about the properties of neutrinos and their role in the universe.”

One of only a couple in the world, the accelerator complex at Fermilab creates an intense beam of neutrinos that is directed at a nearby detector, which observes and records the interactions. Because neutrinos interact so weakly with matter, the detectors have to be large, so as to increase the chances of detection. They also should be underground, so other forms of background radiation in the Earth’s atmosphere, such as cosmic rays, do not fake the signature of the collision process. 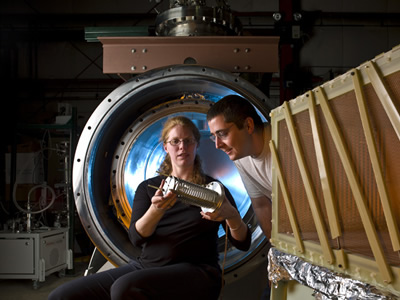 Mitchell Soderberg and Yale physicist Bonnie Fleming inspect a prototype of the MicroBooNE detector at Fermilab. (Courtesy of Fermilab)

MicroBooNE’s detector, which is about the size of a school bus, looks like a grain silo on its side. Inside are 170 tons of liquid argon, through which neutrinos (created by the accelerator) pass and with which they react.

Argon is a colorless, odorless gas at room temperature, but, as a liquid at minus 300 degrees Fahrenheit, it is 40-percent denser than water—making it a good target for neutrinos.

Soderberg says the first MicroBooNE neutrino observation came on the heels of a 13-week shutdown for maintenance to Fermilab’s accelerator, during which the detector was filled with liquid argon. After the accelerator was turned back on, MicroBooNE scientists analyzed data recorded by their detector and found neutrinos.

“When a neutrino hits the nucleus of an argon atom in the detector, it creates a collision that sprays subatomic particle debris,” says Soderberg, adding that Fermilab’s accelerator can spit out billions of neutrinos a second. “By tracking the particles in the debris, we’re able to reveal the type and properties of the neutrinos that produced them.”

Although the existence of neutrinos was first postulated in 1930, another 26 years would pass before the particles themselves were first experimentally observed.   Today, scientists agree there are three types, or flavors, of neutrinos, and that they continuously oscillate among these flavors while hurtling through space.

Because neutrinos are emitted in huge numbers by stars, including the sun, their behavior may hold clues to the universe’s past, present and future.

“For years, scientists have wondered why they haven’t been able to detect the predicted number of neutrinos from the sun, which produces huge quantities of [neutrinos] during solar fusion,” he says. “We now understand that the solar neutrino flux has appeared to be low because the neutrino detector used in the original experiments was sensitive to only one of the three flavors.”

At Syracuse, Soderberg supervises the efforts of three graduate students, one undergraduate and a postdoctoral research associate. Two years ago in the Physics Building, his team made and tested thousands of wires for MicroBooNE’s detector.   The wires collect signals from the collisions of neutrinos with argon atoms. The signals are then converted into high-resolution images of particle tracks.

One of his team members is Jessica Esquivel, a fourth-year Ph.D. student, who helped write the algorithms that led to the detection of MicroBooNE’s first neutrino event. “We get around 660 cosmic events for every one neutrino event,” says Esquivel, who has been involved with the experiment for more than five years, two of which were spent as an undergraduate intern. “As the neutrino has been nicknamed the ‘ghost particle’ for its elusive tendencies, we’ve become known as the ‘ghost hunters.’”

Esquivel says she has come a long way from MicroBooNE’s early days, when much of her work relied on simulation and computer-aided design (CAD) modeling processes. “I’ve gained so much expertise in software development, physics knowledge and networking skills from working on a large collaboration,” she adds. “I know I will be ready for the future, whether it is in academia or industry.”

“Future neutrino experiments will use this technology,” says Sam Zeller, Fermilab physicist and MicroBooNE co-spokesperson. “We’re learning a lot from this detector. 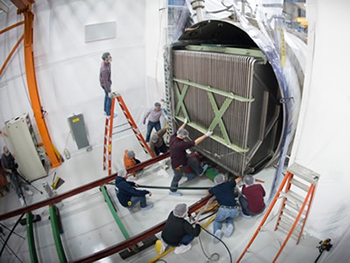 Scientists work on the MicroBooNE detector, which is approximately the size of a school bus. (Courtesy of Fermilab)

Soderberg’s team has also been involved with the construction of the MicroBooNE detector at Fermilab. “This kind of work is important for not only us, but also the entire physics community,” he adds.

Case in point: One upcoming Fermilab project is the Deep Underground Neutrino Experiment (DUNE), which plans to examine neutrino flavor oscillations that occur over hundreds of miles, using a detector 400 times larger than MicroBooNE’s. “It’s about the same size as Syracuse’s Physics Building,” Soderberg says. The DUNE detector will be located in South Dakota, a mile underground, inside an old goldmine, directly in the path of a neutrino beam coming from Fermilab.

“Neutrinos are pretty hot right now,” says Soderberg, pointing out that, a week before the MicroBooNE observation, two scientists were awarded the Nobel Prize in Physics for their work on neutrino oscillations. “Much of what we’re doing right now is purely intellectual, but it’s helping us understand the structure of matter. … Neutrinos have been a source of surprise in particle physics over the past half century. I’m excited to see what secrets we will uncover next with these bold, new experiments.”