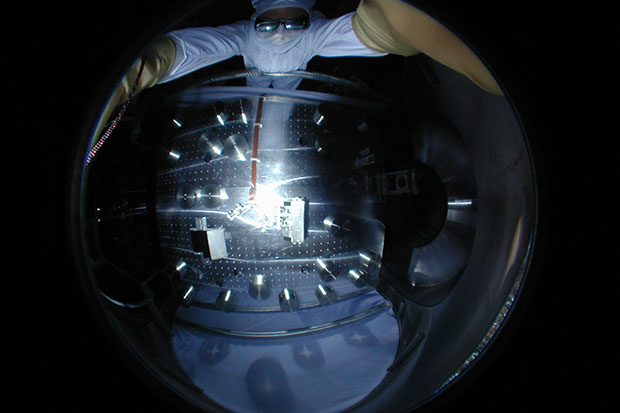 Physicists in the College of Arts and Sciences are playing a key role in the first observation run of the Advanced Laser Interferometer Gravitational-Wave (LIGO) Detector, after a meticulous five-year rebuild.

Detectors at LIGO Hanford in Washington state and LIGO Livingston in Louisiana have begun a new and improved search for gravitational waves, which are ripples in space-time, generated by some of the Universe’s most cataclysmic events, such as colliding black holes and exploding stars. For the next three months, scientists at both sites will work around the clock, checking the quality of data and keeping the detectors online to collect as much data as possible. 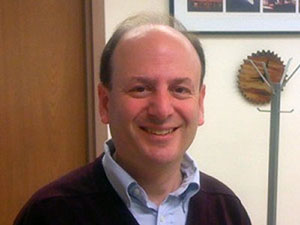 Among them are members of the University’s Gravitational Wave Group—including Peter Saulson, the Martin A. Pomerantz ’37 Professor of Physics. “The past few months have marked the culmination of years of effort to commission Advanced LIGO,” he says. “We’ve been carefully tuning the instruments and conducting practice runs to ensure everything works well.”

Saulson, along with Associate Professor Duncan Brown and Assistant Professor Stefan Ballmer, is part of the LIGO Scientific Collaboration (LSC), comprising hundreds of scientists from around the globe, dedicated to making the first direct detection of gravitational waves.

Ballmer, an expert in gravitational wave astronomy, helped upgrade Hanford’s detector. “Every aspect of these machines must be finely tuned, for us to detect these waves,” he says. “On top of that, both observatories are more than 1,800 miles apart. They must work flawlessly to gain the necessary detection confidence.”

Each LIGO observatory contains an L-shaped interferometer with two several-mile-long arms. A powerful laser beam, originating at the elbow, shoots down each arm, before being reflected back to its source by mirrors at both ends. In the process, light from one arm interferes with that of the other arm. 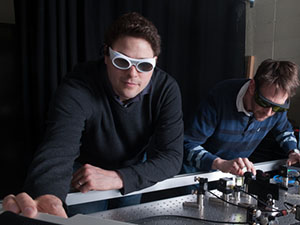 Ballmer says that a passing gravitational wave stretches one arm of the detector while compressing the other, causing the beams to shift in phase with another. “When this happens, light reaches the detector output. LIGO is able to detect these minute phase differences, which are recorded and then used to help determine the origin of the gravitational wave,” he adds.

Brown is optimistic about this new phase of the collaboration, aptly called “Advanced LIGO.” He says the detectors are currently three times more sensitive than the first-generation ones from Initial LIGO, which operated from 2008 to 2010, but did not detect any gravitational wave sources.

“Ultimately, Advanced LIGO will reach a sensitivity that’s 10 times better than Initial LIGO,” says Brown, who looks for signals from pairs of neutron stars and black holes orbiting each other. “At this sensitivity, we expect to see lots of signals every year. Detecting them will enable us to explore black holes in distant galaxies.” 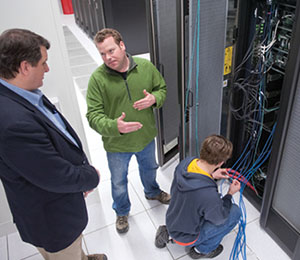 Co-founded by scientists from Caltech and MIT in 1992, LIGO is funded by the National Science Foundation, with support from Australia, Germany and the United Kingdom. Central to LIGO’s international efforts is the LSC, whose spokesperson is Gabriela González G’95, professor of physics and astronomy at Louisiana State University and a graduate of Syracuse’s Ph.D. program.

By combining precision optical instruments with two of the world’s largest vacuum systems, LIGO seeks to redefine the possibilities in astrophysics through the direct detection of gravitational waves.

“Advanced LIGO has the potential to revolutionize our understanding of the Universe,” Brown says. “For instance, scientists don’t know where all the gold and platinum in the Universe is from. They could have been made when two neutron stars collided together at a third of the speed of light. Our observations will help answer these types of fundamental questions.”