Kimberly Pietro has joined the School of Information Studies as assistant dean for advancement. She began on July 21. 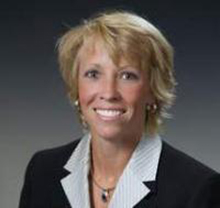 Pietro comes to the iSchool from SUNY Cortland, where she had served as the vice president for institutional advancement and executive director for the Cortland College Foundation. She managed a staff of 35 across development, alumni relations and communications functions. At Cortland, Pietro oversaw the success of the college’s “Educating Champions” campaign – a fundraising challenge that surpassed its goals to raise $27.5 million—the most ambitious campaign in Cortland’s history.

“The relevance of information studies in the educational arena is constantly emerging, and I’m thrilled to be joining this team and look forward to building relationships with students, alumni, faculty, the board and affiliated corporations,” says Pietro. “The iSchool reputation is outstanding, the programs are innovative and the enthusiasm here is contagious—I’m excited to participate and contribute to this community.”

Pietro brings nearly 15 years of experience in advancement leadership to the iSchool, having also served at Onondaga Community College (2010-2012) and Le Moyne College (2001-2010).

In her time at OCC, Pietro assisted with the college’s “Reach Beyond” capital campaign, which exceeded its $7.5 million goal, and oversaw several fundraising and sponsorship opportunities at the college’s SRC Arena, as well as corporate and foundation partnerships.

Pietro rose through the ranks at Le Moyne to become director of major and planned giving. In her most senior role, she coordinated the volunteer structure, and secured major restricted and unrestricted gifts for the college’s $50 million “Achieving New Heights” capital campaign.

“We are so pleased to have Kim join the iSchool,” says Interim Dean Jeff Stanton. “She brings an amazing depth of experience in all of the different areas of advancement. Because she is already so immersed in the world of higher education, she will hit the ground running and help us continue the patterns of innovation and success that the school has experienced in recent years. I’m really looking forward to introducing her to our board of advisors and alumni.”

Pietro earned her bachelor’s degree in physical education at the University of South Carolina, where she was a first-team All-American and the Southeastern Conference Player of the Year in softball in 1999. While in graduate school, she also served as an assistant softball coach at Syracuse University.

She holds a master of science in higher education from the School of Education, and a master of business administration from Le Moyne College.