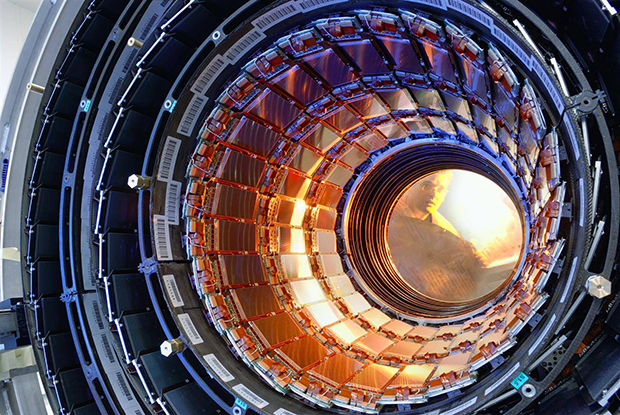 Physicists in the College of Arts and Sciences have been awarded $3 million to build an upgrade to the Large Hadron Collider beauty at CERN in Geneva, Switzerland.

Physicists in the College of Arts and Sciences have been awarded a $3 million grant from the National Science Foundation (NSF) to support their involvement with the construction of an upgrade to the Large Hadron Collider beauty (LHCb) experiment at CERN in Geneva, Switzerland.

Specifically, they will use the three-year award to build an inner tracking device, known as the Upstream Tracker (UT), which will increase the amount of data that LHCb can handle by factors of five to 10. The award will also support data analysis needed to produce physics results.

The UT is scheduled to be installed in early 2019, and is expected to help revolutionize the study of Beyond the Standard Model (BSM) of Physics.

“Our goal is to enhance the capabilities of the UT, above and beyond the requirements that data can be taken,” says Sheldon Stone, Distinguished Professor of Physics, who oversees the Syracuse team at CERN. “The new detector will substantially increase the luminosity that LHCb can handle, thus providing more accurate measurements of fundamental particles and enabling observations of rare processes that occur below the current sensitivity level.”

The UT project is directed by Professor Marina Artuso, and, along with Stone, involves professors Steven Blusk and Tomasz Skwarnicki. The team is augmented by researchers from CERN; the National Institute of Nuclear Physics in Milan, Italy; the University of Zurich in Switzerland; AGH University of Science and Technology in Krakow, Poland; the universities of Maryland and Cincinnati; and the Massachusetts Institute of Technology.

Artuso says the UT will replace the LHCb’s existing tracker, and will consist of four ultra-thin, silicon detector planes. Each 25-square-foot plane, in turn, will produce data that is “read” by custom-built electronic integrated circuits.

“The Standard Model of Physics has succeeded in classifying all known subatomic particles, based on how they interact with one another,” Artuso says. “But for all its success, the Standard Model still raises questions, such as those involving the relationship between matter and anti-matter, the properties of dark matter, and the values of the masses of quarks and leptons [the building blocks of matter]. Much of what we do at CERN—identifying new forces that are manifested by particles—seeks to answer these questions.”

At CERN, Syracuse physicists study hadrons, which are composite particles that are divided into two groups: baryons (e.g., protons and neutrons), each containing three quarks; and mesons, containing a quark and an anti-quark. Blusk says their job is to find particles that could be carriers of new forces.

“The building blocks of all known things—including cars, planets, stars and people—are quarks and electrons, which are tied together by strong, electromagnetic forces,” says Blusk, who recently made headlines with his discovery of two never-before-seen baryons. “The UT will take the LHCb’s already-excellent hadron identification system to a new level of precision and sensitivity.”

Traditionally, direct searches for new particles have required the accelerator’s energy to be high enough for the particle to be produced. But scientists at LHCb think indirect evidence—so-called “virtual footprints,” caused by the decaying of mesons and baryons with bottom quarks—will yield traces of BSM particles.

“The effects of these [indirect] searches are quantum in nature because they’re emitted and absorbed over short periods of time,” Stone says. “So far, none of our results have demonstrated new physics. The upgrade should enable us to probe more aggressively, and better understand such phenomena as charge parity violation, which explains the dominance of matter over anti-matter in the Universe.”

Skwarnicki is excited about the upgrade. In addition to discovering a meson named Z(4430), containing two quarks and two antiquarks, he and Stone helped prove the existence of a pentaquark (i.e., four quarks and an anti-quark). Skwarnicki thinks the UT project will help scientists better understand the structure of matter.

“Having a new detector will, among other things, shed light on how quarks bind together,” he says. “Of course, this is just the tip of the iceberg, as far as major unsolved problems are concerned. The UT will push the boundaries of theoretical and experimental physics in bold, new directions.”

Another, more tangible, benefit of the UT project involves the campus community. Artuso says the NSF grant will enable graduate and undergraduate students at Syracuse to participate in the construction and testing of the detector. Results of the upgrade will then be integrated into QuarkNet, a multiyear educational program at the University that provides professional development and ongoing support for area high school physics teachers.

Artuso says, “It’s important for our students, particularly at the graduate level, to have hardware experience, as well as data analysis capabilities. What we’re doing is vital to the overall LHCb upgrade, and is essential for the collaboration to continue producing cutting-edge physics results.”