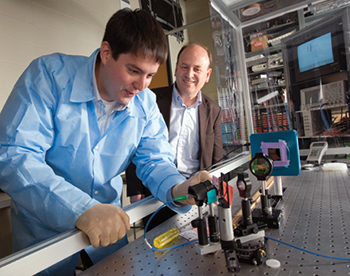 This week’s inauguration of Advanced LIGO facilities in Richland, Wash., and Livingston, La., is a potent reminder of Syracuse University’s long-standing importance in the international astrophysics community.

For nearly 25 years, the University’s participation in the Laser Interferometer Gravitational Wave Observatory (LIGO) project has been one of the College of Arts and Sciences’ biggest success stories. Dozens of faculty, postdocs and graduate and undergraduate students in the Department of Physics have joined in the search for gravitational waves of cosmic origins, making LIGO’s Hanford and Livingston observatories a home away from home.

Starting in the early 1990s, Peter Saulson, the Martin A. Pomerantz ’37 Professor of Physics, led key experiments on LIGO mirror technology. “Our experiments have shown how LIGO’s mirrors can sit exquisitely still—something that is vital for detecting gravitational waves,” he says. “These waves, or ripples, carry information about their dynamic origins and about the nature of gravity that can’t be obtained by traditional light telescopes.”

Led by Caltech and MIT, the Advanced LIGO project involves institutions from 15 other nations, including Germany, the United Kingdom and Australia. Hundreds of researchers, including members of Syracuse’s own Gravitational Wave Group, have spent more than eight years and $200 million in upgrading equipment at the Hanford and Livingston facilities and building Advanced LIGO detectors. Their ultimate goal is to detect gravitational waves from cosmic collisions of nature’s most dense objects: black holes and neutron stars. That one of the people spearheading this global effort is a former Syracuse Ph.D. student—Gabriela González G’95, professor of physics and astronomy at Louisiana State University, as well as a LIGO spokesperson—is a point of pride for the University. 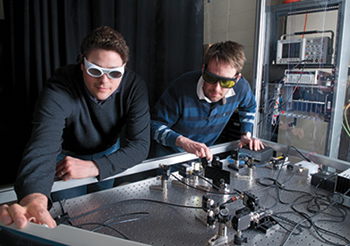 Stefan Ballmer, left, is one of Advanced LIGO’s core designers.

Duncan Brown, associate professor of physics at Syracuse, says gravitational waves predict Einstein’s Theory of General Relativity because their existence has been inferred, but not directly detected.  “Our goal is to detect ripples in space-time from sources hundreds of thousands of light years from Earth. This is far outside our own galaxy,” Brown says. “To do this, we need highly sensitive equipment that can pick up tiny gravitational wave signals amid a sea of noise.”

Brown, who joined the University faculty in 2007, is a leader in gravitational-wave astrophysics. He is currently developing computer algorithms to study the physics of black hole and neutron star mergers. “Advanced LIGO’s detections of gravitational waves will allow us to better understand the nature of gravity and matter,” he adds.

Another key player is Stefan Ballmer, assistant professor of physics and one of Advanced LIGO’s core designers. Since last year, he has been using a prestigious National Science Foundation (NSF) CAREER Award to help Advanced LIGO reach its target sensitivity and to develop technology for gravitational wave detectors beyond the scope of the LIGO project. Much of his time is spent at Hanford, bringing the interferometer online and improving its performance.

Closer to home, Ballmer works in his next-generation detector lab in the Physics Building, developing technology needed to upgrade LIGO interferometers. “We aim to use novel quantum-mechanical tricks to further extend the astrophysical reach of the two observatories,” he says. 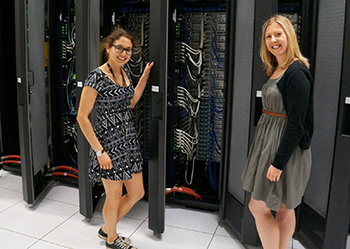 Syracuse faculty and students also benefit from access to a 300 tera-FLOP supercomputer, co-funded by NSF and Syracuse’s Information Technology and Services. Housed in the Green Data Center on South Campus, the computer is used for detecting space-time ripples in Advanced LIGO data and for modeling sources of gravitational waves.

“When LIGO was established, it could measure disturbances up to one one-thousandth of the width of a proton,” Saulson adds. “These new facilities, which we’re celebrating this week, make Advanced LIGO 10 times more sensitive. Syracuse University is proud to have a seat at the table.”