Four professors in the College of Arts and Sciences have received major grant awards from the Simons Foundation, a global organization advancing research in basic science and mathematics.

M. Cristina Marchetti, the William R. Kenan Professor of Physics, is the recipient of a targeted grant from the Mathematical Modeling of Living Systems program. She will use her three-year award, valued at $473,000, to study models of collective cell migration and sorting.

Peter Horn, Graham Leuschke and William Wylie have been awarded Collaboration Grants for Mathematicians, totaling $35,000. The mathematics department will use the five-year awards for scholarly travel and related expenditures.

“These achievements are remarkable for not only the college, but also the University,” says Karin Ruhlandt, dean of Arts and Sciences and Distinguished Professor of Chemistry. “For the Simons Foundation to recognize four different professors across two departments, all at once, is exceedingly rare. Their awards signal a culture of scholarly excellence on campus.” 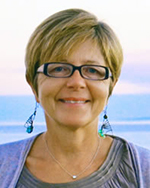 In addition to being a Kenan Professor, Marchetti is associate director of the Syracuse Biomaterials Institute and a member of the University’s Soft Matter Program. Her research involves the structure and rheology of active suspensions and gels, cell cytoskeletons and motility, bacteria swarms and non-equilibrium phase transitions.

“I’m interested in learning how biological matter converts energy to movement,” says Marchetti, who was awarded a 2013-14 Simons Fellowship to organize an international workshop at the University of California, Santa Barbara. “My group uses theory and computation to investigate the rich dynamics of a broad range of systems—from cytoskeletons, cells and tissues to synthetic microswimmers.”

Specifically, Marchetti will develop mathematical models to explain classes of experimental results. “We’re interested in testing theoretical ideas and expanding their reach. We plan to survey what research has been done thus far, to address central broad questions and to identify areas for future breakthroughs,” she adds.

Alan Middleton, professor and chair of physics, is proud of Marchetti’s accomplishment. “This award breaks new theoretical ground by developing models that explain data and motivate new classes of experiments. It speaks to the importance we place on theory-experiment collaboration at the University,” he says. 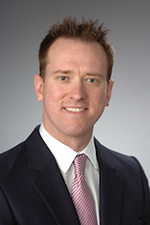 An expert in low-dimensional topology and knot theory, Horn is working on a research project titled “Higher Order Techniques for Topologically Slice Knots.”

“I study knots in three-dimensional space,” says Horn, who, along with Wylie, is a member of the University’s Geometry/Topology Research Group. “Some knots may be untied, if you use four-dimensional space to do the untying, but this can be pretty counterintuitive. … I’m interested in finding out which knots can be untied in 4D and which ones cannot. The latter are known as ‘topologically slice knots.’”

The assistant professor of mathematics illustrates his point by pointing to his shoelaces, whose knots are so stable that they can be untied only in four-dimensional space. “Probably 50 percent of all people tie [my laces] like I do,” he adds. “This kind of work is vital to our knowledge of geometric properties and spatial relations.” 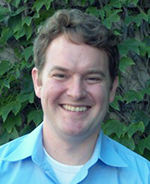 A specialist in differential geometry, Wylie uses calculus and geometry to better understand the concept of curvature—the degree to which a curve deviates from a line or plane.

“A flat plane has zero curvature, a sphere has positive curvature, and a saddle has negative curvature,” says Wylie, an assistant professor of mathematics. “This tells us a lot about the geometry of these surfaces. It’s also central to Einstein’s Theory of Relativity by explaining how a three-dimensional universe curves in four-dimensional space-time.”

As the title implies, Wylie’s research project, “Riemannian Geometry for Manifolds with Density,” is steeped in the work of 19th-century mathematicians Carl Friedrich Gauss and Bernhard Riemann, both of whom produced some of the first notions of curvature in multidimensional space.

Wylie, in turn, looks at curvature in terms of density and geometry of space.

“The basic idea is to consider a space that is made of a material of variable density,” he says, citing, for example, manifolds, which cannot be unfolded into flat pieces. “I’m proposing a new concept of sectional curvature for manifolds with density.” 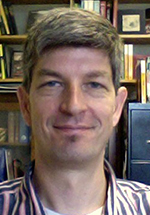 Leuschke is an expert in commutative and non-commutative algebra. Like Horn and Wylie, he is using his fellowship for collaborative research—among other things, to host campus visits by Ragnar Buchweitz and Michel Van den Bergh, noted mathematicians at the University of Toronto and the Free University of Brussels (Belgium), respectively, with whom he has worked for more than a decade.

Leuschke’s project, “Non-Commutative Desingularizations and Representation Theory,” straddles algebraic geometry and commutative algebra by focusing on a concept called resolution of singularities. The concept is rooted in algebraic ring theory, which involves sets of operations of addition, subtraction and multiplication. Leuschke is specifically interested in commutative ring theory (e.g., 5 x 7 = 7 x 5) and its corresponding geometric objects, known as algebraic varieties.

“A resolution of singularities replaces an algebraic variety with one that is isomorphic, or the same, to it everywhere, except at the singular points,” he says, referring to the set of points where the algebraic variety is pinched or folded, rather than being smooth. “My work with Buchweitz and Van den Bergh is based on a suggestion from mathematical physicists working in string theory that there should be an algebraic analogue of resolutions of singularities that uses non-commutative rings.”

Since Isaac Newton first classified algebraic curves in the 1670s, mathematicians have developed some 20 different methods for showing how solutions of polynomial equations have resolutions of their singularities.

“These [non-commutative] rings don’t come from algebraic geometry, but one can hope that they’re easier to work with,” says Leuschke, professor and assistant chair of mathematics.

Adds Uday Banerjee, professor and chair of mathematics: “Professor Leuschke is an algebraist of the highest order, and Professors Horn and Wylie are brilliant geometricians. These grants help support the ‘mathematical marketplace’—here at the University and in the academy, in general—by increasing collaborative contacts between mathematicians.”