The Department of Earth Sciences in the College of Arts and Sciences continues to rack up faculty honors and awards. The latest involve Linda Ivany ‘88, who has been elected a fellow of the  Paleontological Society (PS); Suzanne Baldwin, who has been part of a steering committee assessing opportunities and challenges for geochronology (i.e., the study of determining the age of Earth materials); and Scott Samson, who is the recipient of a major grant award supporting study of the Earth’s crust.

“I am extremely proud of these professors,” says Don Siegel, chair of Earth sciences and holder of the Heroy and Meredith professorships. “Each of them is tackling some of the most complex questions facing the world today. Their leadership and service exemplify the high ideals of our department and are indicative of the University’s global role in the geological sciences.” 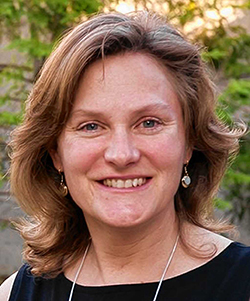 Ivany is a full professor and highly regarded geologist. Recently, she was elected a PS Fellow for her outstanding contributions to paleoecology, paleoclimatology and biotic responses to environmental change; her integration of organismal and geochemical approaches to paleoecology; and her service to the profession as a PS councilor-at-large (2010-12); associate editor of the PS quarterly journal, Paleobiology (2011-14); and a trustee of the Paleontological Research Institution (PRI) in Ithaca, N.Y., since 2008.

“There is nothing more gratifying than recognition from your peers and colleagues,” says Ivany, also a past president of the PRI board. “I am truly honored and humbled to be included in this illustrious group.”

Less than one-half of one percent of PS members are elected Fellows each year.

PS is an international nonprofit organization devoted exclusively to the advancement of the science of paleontology: invertebrate and vertebrate paleontology, micropaleontology and paleobotany. 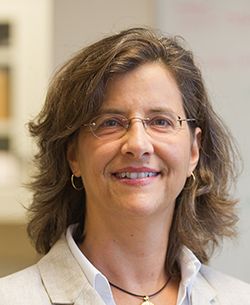 Baldwin is the inaugural Michael G. and Susan T. Thonis Professor. In March, she was part of a seven-member delegation that traveled to Washington, D.C., to present findings from a yearlong study of the role of geochronology in transformative geologic research and how such research is funded in the United States.

Supported by the National Science Foundation (NSF), the team was created in response to a recommendation in the report “New Research Opportunities in the Earth Sciences” (National Academies Press, 2012), authored by the National Research Council. Central to the report are “urgent societal issues,” such as dwindling fossil fuel and water resources, growing numbers of earthquake and tsunami disasters, and nuclear weapons proliferation and testing, that could benefit from an understanding of Earth sciences.

“We worked closely with the U.S. geochronologic community to identify ways that interdisciplinary research can sustain and enhance contributions to society over the next decade,” Baldwin says. “To understand how the Earth has evolved over geologic time is impossible without input from geochronologists. More studies that address fundamental geologic concepts and societal needs require more data—and higher-precision data—to determine the timing of geologic events.”

Baldwin acknowledges the growing demand for such data: “It’s a huge challenge, given the complexity of most of the analytical techniques used, the need to support innovation, the high-tech nature of the instrumentation and, especially, the need for highly trained personnel.”

Thus, under consideration are instrumentation and facilities needed to support existing and emerging research opportunities; burgeoning collaborations among government, industry and higher education; and the training of the next generation of geochronologists.

Baldwin says the NSF-appointed committee gathered much of its data at workshops and town-hall meetings it convened and at various conferences, including the 2014 Goldschmidt Conference (co-presented by the U.S. Geochemical Society and the European Association of Geochemistry) in Sacramento, Calif.; the 14th International Conference on Thermochronology in Chamonix, France; and the annual meeting of the Geological Society of America in Vancouver, British Columbia. 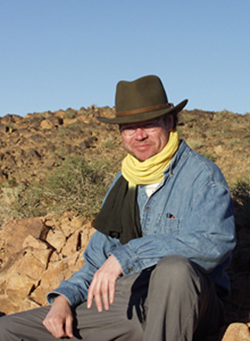 Samson is a professor and an associate chair of Earth sciences, as well as a faculty fellow of the Forensic and National Security Sciences Institute. The NSF has awarded him a $139,000 grant to study zircon, an extremely durable mineral whose crystals provide hints about the physical and chemical conditions in which they are formed.

While scientists have found zircon crystals dating back to 4.3 billion years ago (approximately 200 million years after the Earth was formed), Samson and his colleagues are targeting ones from 1 billion years ago found in parts of Appalachia, such as the Blue Ridge Mountains of Virginia.

“Our work takes advantage of the ability of zircon to record the temperature history of magma generated in the crust,” Samson says. “We’ll concentrate on an area known as the Grenville Blue Ridge Province, which is home to a large suite of ancient, high-zirconium granites.”

In addition to relying on various geochemical imagining and analytical techniques, Samson and his team will make use of a “geological thermometer,” a mathematical equation that describes how much of a chemical is found in a mineral, when the latter forms at a particular temperature. In this case, they will develop a thermometer for the amount of titanium in zircon crystals.

“There must have been unique lithospheric conditions, such as astonishingly high temperatures, for these zirconium-rich granites to form,” he says. “We can infer a lot about the evolution of the Earth’s crust by examining these tiny, ancient crystals.”