Student entrepreneur and School of Information Studies (iSchool) senior Daniel Goldberg is in Washington, D.C., this week as a finalist in the Entrepreneurs’ Organization Global Student Entrepreneur Awards (GSEA) competition. 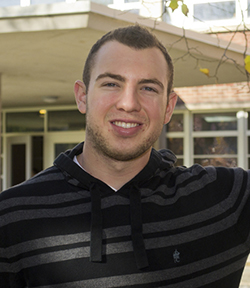 One of 41 contestants from around the world, Goldberg will be pitching his martial arts equipment startup Diamond MMA. The company produces a protective cup product for athletes who compete in high-impact sports. Goldberg is a partner and chief operating officer of the company.

The 2015 GSEA winner will receive $20,000 in cash for their startup, and gain access to the Entrepreneurs’ Organization’s global network of 10,000 business owners worldwide.

Goldberg’s trek to the GSEA finals began last semester, when he took first place in a regional competition in Chicago, qualifying him as one of the best student entrepreneurs in the nation. Since then, he has been working on perfecting his pitch, and preparing for the judges’ scrutiny of his business plans.

“I’ve been tweaking and re-tweaking my presentation, working with past contest judges and talking to past participants to figure out what makes someone win or lose,” explains Goldberg. “The only thing you can control in this competition is your pitch, and you need the strongest pitch that meets the judges’ criteria in order to win it.”

Although Goldberg says he’s briefly looked over the list of GSEA finalists he’ll be competing against, it’s not making him nervous.

“There’s really no reason to spend time looking at the other contestants,” says Goldberg. “That can only make you nervous; it can’t help. This is one of the few times in life where it doesn’t give you any benefit to know who your competition is—you have to focus on your own pitch.”

As he’s been refining his presentation slides and pitch, Goldberg has been working closely with a number of people from around the iSchool.

“They’ve been a big help in this, helping me review my slides and fine-tune my overall pitch,” says Goldberg. “They’ve been providing mentorship to get me ready.”

“True entrepreneurs have a vision that they’d like to achieve that is guided by market and mentoring feedback,” says Liddy. “Dan epitomizes this approach in his understanding of customer needs and his ability to iterate based on market demands. He engages his mentors and coaching to drive his passion forward.”

Goldberg has also been receiving advice and encouragement from entrepreneur and iSchool Board of Advisors member Wiley Cerilli. Cerilli is vice president and general manager of Single Platform for Constant Contact, and a venture partner in First Round Capital.

“What Wiley offers is a lot of confidence,” explains Goldberg. “To hear from someone else who is a successful entrepreneur provides validation. At the end of the day, it’s about owning the stage, I have to present with confidence and own it, and the more people that validate me, the more I feel like I can do it.

Besides the thrill of the competition itself, Goldberg is also looking forward to expanding his professional network, and uncovering media and promotional opportunities for Diamond MMA while at the competition.

“I’m still in touch with many people I met at the last competition,” says Goldberg. “It’s good to be around other people who are doing the same kind of thing that you are.”

With his senior year soon drawing to a close, Goldberg is making plans for his life after Syracuse. He will spend the summer working full time from home on his business, and traveling to China to talk with the company’s suppliers.

In the fall, Goldberg will relocate to Chicago, to join the rest of the Diamond MMA team already working there.

Although he’ll be in the windy city, he’s bringing all he learned at Syracuse with him.

“I always say that if I didn’t come to Syracuse University, I wouldn’t be an entrepreneur right now,” explains Goldberg. “ The Student Sandbox class changed my life. I came here with a business, but I didn’t know anything about running that business. But I was hungry to make it happen.”