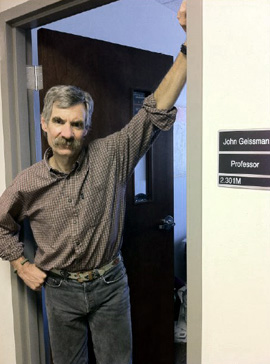 Highlights include a keynote address by John W. Geissman, professor of geosciences at the University of Texas at Dallas (UT Dallas), at 3 p.m. in the Heroy auditorium and a lava pour at 5 p.m. at the University’s Comstock Art Facility. The symposium costs $5 and is open to the public.

CNYESSS is organized and presented by the student-run Geology Club in the Department of Earth Sciences in the College of Arts and Sciences. For more information, call 315-443-2672 or email sugeoclub@gmail.com.

“This is an opportunity to showcase some of the exciting student research going on at institutions around the state,” says Donald Siegel, holder of both the Heroy and Meredith professorships and chair of the University’s Earth sciences department. “A poster provides an excellent snapshot of a student’s research, in hopes the reader will want to learn more about it. Many a collaboration has begun in front of a poster board.”

Siegel adds that the Syracuse posters reflect the research areas for which his department is internationally known: tectonics, ancient climates and hydrology.

To that end, the University has invited Geissman, a leading figure in paleomagnetism, to headline CNYESSS. His presentation, “The Geosciences and Humanity: The 21st Century Is the Century of Our Hard Earth Science (Or Else),” doubles as Syracuse’s annual Geoffrey O. Seltzer Lecture, named for the late professor whose research focused on the Quaternary period.

In addition to studying paleomagnetism and rock magnetism, Geissman is a staunch advocate of science literacy, as evidenced by his involvement with the Geological Society of America (GSA), of which he has served as president; the Building Strong Geoscience Departments program, sponsored by the National Science Foundation; and the journal Eos, of which he has served as editor.

Geissman is also professor emeritus of earth and planetary sciences at the University of New Mexico (UNM). A GSA Fellow, he earned graduate and undergraduate degrees, including a Ph.D., from the University of Michigan.

“Professor Geissman is generally credited for revitalizing paleomagnetic research at UT Dallas, following a lengthy hiatus,” says Siegel, adding that Geissman arrived there in 2010 after teaching at UNM for 17 years. “He is currently working on a variety of research projects around the world, including ones in North America, Africa and India, which use fossil magnetism in geologic materials to better understand plate tectonics and continental drift.” 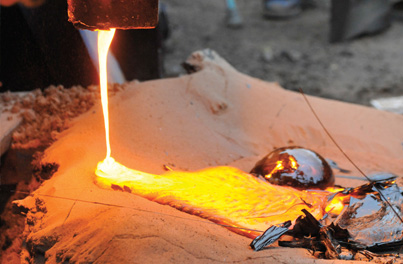 A lava pour is one of the events scheduled during the symposium.

CNYESSS concludes with a lava pour by Robert Wysocki and Jeff Karson, professors of art and Earth sciences, respectively, who head up the University’s Lava Project. Both of them melt basaltic lava–similar to that found on the seafloor and in volcanoes in Hawaii and Iceland—to produce natural-scale lava flows.

“A lava pour helps us understand how sub-glacial volcanoes may have behaved millions of years ago,” Siegel concludes. “It also provides insight into previous ice ages and the Earth’s climate history, in general. It’s where science meets art.”

A complete schedule is available here.