About half a million people receive hip replacements worldwide every year. Of these, a small percentage will develop health complications due to their implant. Complications like inflammation and infection, even damage to bone and tissue, can become so severe that some devices need to be painfully and invasively removed and replaced. Syracuse Biomaterials Institute Professor Jeremy Gilbert’s latest research challenges the conventional wisdom of why this occurs. 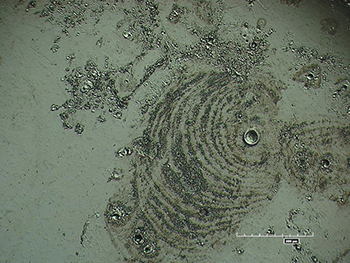 For more than 40 years, the ball of the total hip replacement has been made from a cobalt-chromium-molybdenum (CoCrMo) alloy and the socket has been made with polyethylene or CoCrMo. The orthopedic research community has known that, as the patient walks, the surfaces rub together and particles and corrosion-based ions are released into the surrounding tissue over time. The assumption for most of the last 30 years was that that these particles and ions were causing a biological reaction that caused health problems in a subset of patients.

Gilbert’s research, “Direct in vivo inflammatory cell-induced corrosion of CoCrMo alloy orthopedic implant surfaces,” indicates that wear and tear is not the only way implants can corrode. Our biology is also waging an attack on the foreign implant.

“Up until this paper, the orthopedic community’s understanding was that corrosion and wear from walking around released particles that cause adverse biological reactions,” explains Gilbert. “What our research finds is that our bodies’ own biological reactions can cause the corrosion directly and that’s a fundamentally different way of thinking about these interactions. “

Gilbert reached his conclusions by looking at hip and knee implants that had been removed from patients. By examining them closely, his research team discovered telltale corrosive “footprints” of phagocytic cells that had crept along the implant, corroding the surface along the way. Phagocytes are the human body’s mechanism for killing and destroying foreign bacteria and objects—our primary tool for fending off infection and in wound healing. The metal showed microscopic signs of deterioration from these cells in all areas of the implants.

These findings reveal that the relationship between implants and the body are more complicated than previously thought, and expand the scope of potential research and medical advances in the area of orthopedics.

“The idea that inflammatory cells in the body can directly corrode the surface of an implant opens up the possibility that it is not just wear and corrosion that causes adverse local tissue reactions, but that ‘adverse’ local tissue reactions can cause corrosion,” explains Gilbert. “A small fundamental advance like this can uncover countless new paths and questions that can lead to a many technical advances to help deal with an issue that is significant in orthopedics today.”