The College of Arts and Sciences has lost one of its senior statesmen. Harvey Kaplan, who served on the physics faculty from 1959 until his retirement in 1996, died on Feb. 11. He was 90 years old. 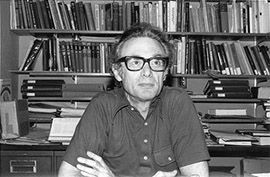 “Harvey possessed a curiosity that inspired generations of students and researchers,” says A. Alan Middleton, professor and chair of physics. “More importantly, he was a good person—someone with a sense of fairness, a dry wit and a love of music and wordplay. Harvey was, without a doubt, one of our department’s most enduring figures.”

Prior to Syracuse, where he rose to the rank of professor, Kaplan spent five years as a faculty member at the University at Buffalo and two years as a postdoctoral research associate at the Massachusetts Institute of Technology, working under eminent quantum theorist John C. Slater.

After graduating from New York’s High School of Music & Art, Kaplan received a diploma in violin performance at the world-renowned Manhattan School of Music (MSM). Music became a lifelong passion, as evidenced by his lengthy involvement with the Syracuse Friends of Chamber Music and Civic Morning Musicals. He also was a virtuoso whistler.

“Beyond the acrobatics of his trills and double stops, there was something inner and deep that he derived from whistling,” says son Mark. “In his later years, when his hearing deteriorated sharply, he could hear whistling much more distinctly than words and was able to use whistling signals of different kinds to communicate with Leslie Singer [his partner from 1988 to 2015].”

After graduating from MSM, Kaplan joined the U.S. Army and fought in Guam and Okinawa during World War II, receiving a Purple Heart and Bronze Star Medal for his service. Afterward, he earned a bachelor’s degree and Ph.D. in physics from the City College of New York and the University of California, Berkeley, respectively.

Throughout his 45-year career as a physicist, Kaplan repeatedly showed his mettle in the lab and the classroom.

“His two loves were physics and music—together and separately,” Middleton adds. “He often shared this excitement with students, demonstrating the interrelationship between creative thinking and scientific advancement.”

After retiring from Syracuse, Kaplan returned to New York City, where he served as a visiting scholar and volunteer tutor in City College’s physics department. He also enjoyed hiking, cooking, baking and biking—something he could be seen doing in Central Park, well into his seventies.

Kaplan was married to Annetta Katz from 1947 to 1987. He is survived by Singer, his three children (Sandra, Mark and Tami), and his two younger brothers (Melvin and Burton).

In lieu of flowers, Kaplan’s family suggests donations be made in his memory to the Department of Physics, MSM, WNYC (New York Public Radio), or the UJA-Federation of New York.