School of Information Studies (iSchool) Associate Professor Scott Nicholson, an expert in meaningful gamification, transformative games, facilitating learning through games and play in non-classroom settings, and a game designer himself, has been invited to address the IndieCade East conference in New York in February. 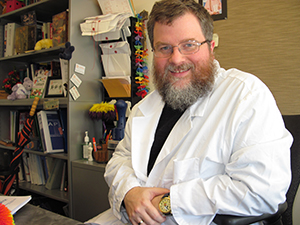 Nicholson’s talk will focus on the synergy and partnerships that game designers can discover by partnering with public libraries. He said he hopes to raise awareness among that audience about how the incorporation of maker spaces and game design into libraries’ offerings has heightened the public’s interest in games. That trend has created an inviting environment for game designers and developers, and provides “a stage where indie game designers can reach out to partner with local public libraries to run workshops and engage with community members for ideation and playtesting,” he notes.

While most people may still think of the library as the place for books, “It’s my goal to help people realize that libraries are a place for communities,” Nicholson explains. The library dynamic benefits game designers and developers because “The playtesting process is something that requires others, and the library can serve as a place to connect game designers and developers with people willing to try out games. Just like libraries can be places where community members share writing, music and art, they can also be a place where community members share games.”

Nicholson has spent many years researching and writing about how games can be a conveyance for information and a means to facilitate learning. He founded the Games and Gaming Members Initiative Group for the American Library Association. In addition to his teaching at the iSchool, he leads the Because Play Matters Game Lab; founded and directs the Game Designers Guild, a community organization; and has facilitated game jams in the Syracuse community for children and families.

Nicholson has presented numerous talks and workshops on meaningful gamification and games as a mechanism to transmit information, and has written extensively on those topics. In 2011-2012, as a visiting associate professor at the Massachusetts Institute of Technology, comparative media studies department, he taught workshops and built connections to game developer and designer community. He has designed and published two board games, “Tulipmania 1637” and “Going, Going, GONE!”

Recently, Nicholson spoke at the CUNY Games Festival, a conference on game-based learning in higher education. His talk was titled, “Base-Jumping from the Ivory Tower: Connecting to the Community through Participatory Game Design.”