Ryan Milcarek spent mornings over a long weekend in May dining with astronauts. There were brief introductions—Where are you from? What do you study?—But the conversation quickly turned to combustion and fuel cells. Over eggs and coffee, veteran astronaut Jerry Ross and Milcarek discussed the topics they both know intimately—Ross from his record seven spaceflights and Milcarek from his studies and research in mechanical engineering at Syracuse University’s College of Engineering and Computer Science. 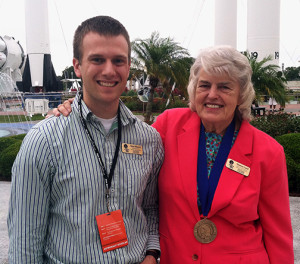 As a junior, Milcarek was awarded the prestigious Astronaut Scholarship, given by the Astronaut Scholarship Foundation. It is presented to U.S. students who exhibit exceptional performance, initiative and creativity in science and engineering. In addition to providing funding, the foundation also connects Milcarek and his fellow scholars with accomplished engineers, like Ross, at special events throughout the year.

This past May, he was invited to attend the induction of Ross and Shannon Lucid into the Astronaut Hall of Fame at NASA in Cape Canaveral. Seeing this as an opportunity that was too good to pass up, the College’s Department of Mechanical and Aerospace Engineering sent Milcarek to attend.

Milcarek was given V.I.P. access to the Kennedy Space Center, experiencing parts of NASA that the public never sees, including inside the Orion Mars Space Mission. At a gala the night before the inductions, he ate dinner with the Saturn 5 rocket suspended directly overhead. On a tour, he encountered the Space Shuttle Atlantis on full display, open and nearly close enough to touch. Milcarek inspected the legendary shuttle through the eyes of a mechanical engineer and discovered a new appreciation for what NASA has accomplished.

He says, “Growing up I had a fairly abstract understanding of space exploration. Everybody knows about NASA and going to the moon, but when you actually see and hear how it happened, you understand just how far incredible imagination and hard work can take you. The men and women who design spacecraft have to consider an astounding number of things in what can be life or death missions for the astronauts. I look back on the moon missions and imagine if it was me doing that work 50 or 60 years ago. How would I have fit into that picture?”

Milcarek is currently researching the integration of fuel cells—not for a spacecraft, but for our homes. In Associate Professor Jeongmin Ahn’s combustion and energy research lab they are seeking ways to employ solid oxide and flame fuel cell technology to provide heat and electricity. Currently, electricity is becoming more and more expensive and is often generated by unsustainable coal and natural gas. They see fuel cells as a necessary way to transition to the use of hydrogen for home appliances. A shift to hydrogen will require significant changes to the infrastructure, so flame fuel cells could serve as a go-between solution.

Milcarek is working toward a master’s degree in energy systems and mechanical engineering, as well as a Ph.D. in mechanical and aerospace engineering, to help him achieve his goal of becoming an energy engineer.

“There’s a tremendous need for experts in energy in the U.S. We’re potentially moving toward a completely different way of approaching energy. It’s a very hot field and there’s a need for people who understand it. There’s this new idea of the energy engineer, but they have to be people who are interdisciplinary. They need to be able to work mechanically, understand HVAC, and think in terms of electricity and power. Lots needs to be done and I’ve been inspired to make my mark there.”