Physicists in the College of Arts and Sciences have made important discoveries regarding Bs meson particles—something that may explain why the universe contains more matter than antimatter. 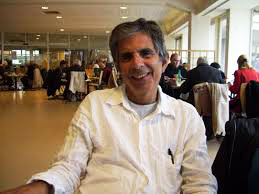 Distinguished Professor Sheldon Stone and his colleagues recently announced their findings at a workshop at CERN in Geneva, Switzerland. Titled “Implications of LHCb Measurements and Their Future Prospects,” the workshop enabled him and other members of the Large Hadron Collider beauty (LHCb) Collaboration to share recent data results.

The LHCb Collaboration is a multinational experiment that seeks to explore what happened after the Big Bang, causing matter to survive and flourish in the Universe. LHCb is an international experiment, based at CERN, involving more than 800 scientists and engineers from all over the world. At CERN, Stone heads up a team of 15 physicists from Syracuse.

“Many international experiments are interested in the Bs meson because it oscillates between a matter particle and an antimatter particle,” says Stone, who heads up Syracuse’s High-Energy Physics Group. “Understanding its properties may shed light on charge-parity [CP] violation, which refers to the balance of matter and antimatter in the universe and is one of the biggest challenges of particle physics.”

Scientists believe that, 14 billion years ago, energy coalesced to form equal quantities of matter and antimatter. As the universe cooled and expanded, its composition changed. Antimatter all but disappeared after the Big Bang (approximately 3.8 billion years ago), leaving behind matter to create everything from stars and galaxies to life on Earth.

“Something must have happened to cause extra CP violation and, thus, form the universe as we know it,” Stone says.

He thinks part of the answer lies in the Bs meson, which contains an antiquark and a strange quark and is bound together by a strong interaction. (A quark is a hard, point-like object found inside a proton and neutron that forms the nucleus of an atom.)

In Geneva, Stone and his research team—which includes Liming Zhang, a former Syracuse research associate who is now a professor at Tsinghua University in Beijing, China—have studied two landmark experiments that took place at Fermilab, a high-energy physics laboratory near Chicago, in 2009. 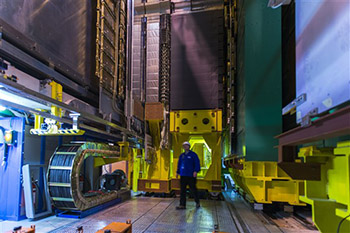 The Large Hadron Collider at CERN

The experiments involved the Collider Detector at Fermilab (CDF) and the DZero (D0), four-story detectors that were part of Fermilab’s now-defunct Tevatron, then one of the world’s highest-energy particle accelerators.

“Results from D0 and CDF showed that the matter-antimatter oscillations of the Bs meson deviated from the standard model of physics, but the uncertainties of their results were too high to make any solid conclusions,” Stone says.

He and Zhang had no choice but to devise a technique allowing for more precise measurements of Bs mesons. Their new result shows that the difference in oscillations between the Bs and anti-Bs meson is just as the standard model has predicted.

Stone says the new measurement dramatically restricts the realms where new physics could be hiding, forcing physicists to expand their searches into other areas. “Everyone knows there is new physics. We just need to perform more sensitive analyses to sniff it out,” he adds.