Iceland is once again erupting onto the world stage, thanks to a spectacular volcanic system that has been spewing lava since early September. 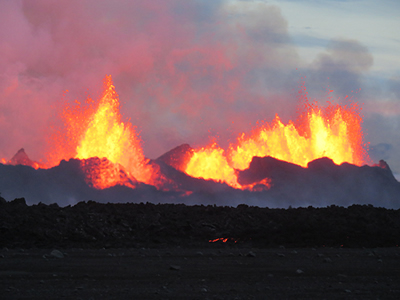 A lava fountain at the volcano’s central vent, known as “Baugur” (Icelandic for “ring” or “circle”).

Jeffrey Karson, a Syracuse University geologist who recently traveled to Iceland to monitor the early stages of the eruption, says the lava field now covers more than 22 square miles (or 14,000 acres), nearly the size of Manhattan.

Iceland, which is made up of lava flows, hasn’t witnessed anything of the sort in 40 years. The country’s most recent major eruption took place in 2010, when ash from the Eyafjallajökull volcano disrupted air travel for more than a week across parts of Europe.

“The lava that erupted at Eyafjallajökull was much less extensive than what we’re seeing now,” says Karson, an Earth sciences professor in the College of Arts and Sciences. “This one doesn’t show any signs of slowing down.

An expert in structural geology and tectonics and the co-founder of the Syracuse University Lava Project, Karson regularly travels to Iceland to study faulting and volcanic structures. His latest trip in September gave him a first-hand glimpse—much of it from close range—of the ongoing eruption fed by the Bárðarbunga volcano, located under the country’s most extensive glacier. On average, the system produces enough lava, every five minutes, to fill an area the size of a football field.

“The eruption is the result of the spreading apart of two tectonic plates [the Eurasian Plate and North American Plate], which are literally pulling Iceland apart,” says Karson, who is collaborating with investigators at the University of Iceland’s Institute of Earth Sciences. “As the plates diverge, magma from deep in the Earth is injected upward to fill the gaps. Individual eruptions can last for months, or even years.”

Karson adds that the eruption has been one of the most closely studied ever: “Iceland is a natural laboratory that allows us to study volcanoes and faulting across a range of disciplines, including geochemistry, geophysics, geology and petrology. Everything we learn there adds to our understanding of how the Earth works.”