A professor in the College of Arts and Sciences has received a major grant to upgrade the cyberinfrastructure used by the Laser Interferometer Gravitational-Wave Observatory (LIGO) to search for gravitational waves. Gravitational waves are ripples in space-time that were first predicted by Albert Einstein in 1913. LIGO is a large-scale international physics experiment designed to detect and study the ripples generated when two black holes crash into each other. 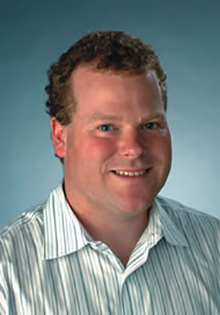 Duncan Brown, associate professor of physics, is the recipient of a three-year $900,000 award from the National Science Foundation (NSF), enabling him to develop robust, data-centric tools to extract the tiny signatures of gravitational waves from LIGO’s data. Brown’s goal is to develop more efficient ways of accessing and mining large data sets, generated by LIGO’s diverse gravitational-wave searches.  The award comes from the NSF’s Data Infrastructure Building Blocks (DIBBs) program. The goal of the DIBBs program is to accelerate interdisciplinary and collaborative research in scientific domains that are driven by vast amounts of data.

Brown is joined in the effort by co-principal investigators Peter Couvares, a senior research scientist in the Department of Physics; Jian Qin, a professor in the School of Information Studies; and Ewa Deelman, a research associate professor of computer science and assistant director of science automation technologies at the University of Southern California.

Brown says that as LIGO pushes the boundaries of physics and astronomy it is also redefining scientific data management. More than 800 scientists at over 50 institutions analyze LIGO data—a group collectively known as the LIGO Scientific Collaboration (LSC).  To find gravitational waves, Brown and his colleagues construct “scientific workflows.” These workflows compose and execute the series of computational and data manipulation steps needed to detect the tiny ripples produced as the black holes orbit each other and eventually collide.

Whereas LSC’s current workflow management tools benefit individual scientists, they are less effective with teams of scientists, especially ones scattered across the globe. “Scientific workflows for data analysis are used by a broad community of scientists, including those in astronomy, biology, ecology and physics,” says Brown, an expert in gravitational-wave astronomy and astrophysics. “Making them ‘metadata-aware’ [i.e., involving data about data] is an important step toward producing workflow results that are easy to share, reuse and reproduce.”

“As the number of LSC scientists increases, the ability to discover, share, reuse and verify data from one another’s analyses is impaired,” says Brown. “This is a common problem in many domains.” The solution? Upgrade LIGO’s existing cyber-infrastructure with greatly improved data-management and analysis tools. Qin, for one, is excited about the holistic nature of the project. An expert in the analysis of large, heterogeneous data collections, she looks forward to plying her trade in the natural sciences. “Because [LIGO] is computational intensive, we have to understand how data flows from one point to another, as well as the provenance information [that is] generated along the way,” she says of the project. “It’s important to know the workflows at each stage of a research lifecycle.”

Designed to detect gravitational waves in the visible Universe, LIGO is operated by scientists at the California Institute of Technology and Massachusetts Institute of Technology. The detectors themselves are located at the LIGO Livingston Observatory in Louisiana and the LIGO Hanford Observatory in Richland, Wash.    Brown’s project is timely, as construction of second-generation Advanced LIGO detectors is nearing completion and first observing runs are slated for next year.

“Gravitational waves carry information about the changing gravitational fields of distant objects, and we’re on the brink of detecting them for the first time,” says A. Alan Middleton, professor and chair of physics. “The work Duncan is doing for LIGO will extend our understanding of the universe and will build new methods for working with complex information.”