Sharing Passion for Science from One Generation to the Next

Share
College of Engineering and Computer ScienceCommunitySchool of EducationUniversity College

Jessica Whisher-Hehl G’09 knows that being surrounded by educators at home and at school ignited her desire to study science and engineering. Her father was a guidance counselor at Saranac Lake High School and her mother was an elementary teacher in the same district.

“My mom really instilled in me the importance of learning,” says Whisher-Hehl. “She sat down with me each night and did her school work as a teacher while I did my homework.” Whisher-Hehl says she didn’t have just one favorite teacher in school because all of her teachers were passionate about the subject matter they taught. 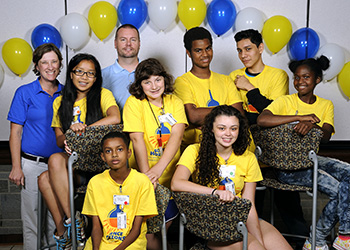 Jessica Whisher-Hehl, left, with students in the Science Horizons program

Whisher-Hehl, who lives in Manlius, received an undergraduate degree from Clarkson University in civil engineering with a minor in environmental engineering. She worked as an engineer for a local environmental consulting company, but decided to leave that job and pursue an advanced degree in engineering.

“I received an NSF Fellowship in which I was required to work with science teachers at Fowler High School to implement real-life environmental issues into their existing science curriculum,” says Whisher-Hehl. While working at Fowler she realized her passion for teaching and decided to pursue a master’s degree in science education instead of engineering. Whisher-Hehl completed her master’s degree at Syracuse University in July 2014.

Now a Ph.D. student in science education at the University, Whisher-Hehl says that she felt well supported through both her master’s and Ph.D. efforts. “As a Ph.D. student, I value the faculty I collaborate with who not only work on their own research projects, but have the time to support, inspire and help me improve my own knowledge and abilities,” she says.

This summer, Whisher-Hehl had the opportunity to share her passion for science with 40 middle school students from around Onondaga County through the 22nd annual Science Horizons Program. The weeklong science adventure, which ran July 7 -11, is fully funded by Bristol-Myers Squibb and administered through University College of Syracuse University.

Whisher-Hehl says the program was enhanced by the number of Syracuse University graduate students, professors and staff members who volunteered their time to allow the middle-school students to experience a variety of science and engineering disciplines in a hands-on manner.

While the middle-school students explored the fields of engineering, chemistry, biology and the environment, Whisher-Hehl says she learned a lot herself, especially during the field trip to Bristol-Myers Squibb. “I learned the science behind biologics,” she says. “It’s inspiring to see these professional scientists and engineers from Syracuse University, SUNY-ESF and Bristol-Myers volunteer their time to share the knowledge and excitement about science with their students.”

Whisher-Hehl appreciates the opportunity that Bristol-Myers Squibb has given middle-school students for the past 22 years by fully funding the science camp. “They’ve given students exposure to authentic science and engineering disciplines,” says Whisher-Hehl. The students visited real laboratories and participated in hands-on authentic tests and investigations. They had the opportunity to talk to various professionals about their own backgrounds and heard actual scientists and engineers explain about their jobs and how they achieved their goals.

Whisher-Hehl says that the framework for the Next Generation Science Standards is firmly grounded in a “science for all” approach.

“We need to develop a citizenship that understands what science is and can engage in evidence-based reasoning,” she says. “So much of our world now is science based—global climate change, personal nutrition and health decisions, and community issues such as the Onondaga Lake cleanup project. We look at science as a career, but science is around us all the time, and all of us should all have some level of science literacy.”

The Science Horizons program gives students the authentic experience that helps them see and better understand the science in their life as well the cutting-edge science and engineering that is prevalent locally.