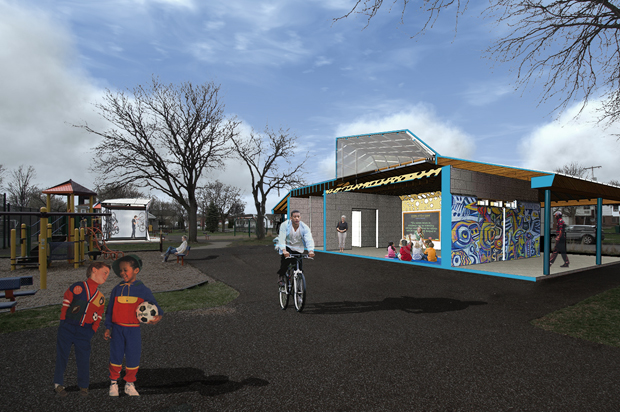 The Near West Side of Syracuse became a familiar haunt for a team of architecture, engineering and industrial design students last spring.

They met with neighbors, shopped at local stores and visited its art galleries and green spaces.

They were there to absorb the neighborhood’s environs and imagine what a renovation of the current Skiddy Park field house might look like.

Architecture student Julian Curry ’15 remembers first visiting the windowless, concrete structure at the start of the semester and thinking it was pretty bleak—but with possibilities. “We were all excited about the location,” Curry says. “It seemed like it had a lot of potential.”

Four months later, the students had produced a design for the field house that bridged community needs and the creative concepts of architects and calculations of engineers.

The new design, set to be implemented by the City of Syracuse Parks Department in 2015 and possibly at other field houses in the city, showcases a broad skylight, inviting entrances and new materials that add texture.

Not the typical studio

Unlike the typical studio project, the challenge for students was working within the parameters of an actual budget, various opinions of community members and the constraints of city officials.

“It’s a different perspective when you know your work is going to affect people’s lives,” Curry says. “The most rewarding part was engaging with the community and seeing how design can make an impact.”

The project came about through Marc Norman, director of UPSTATE: A Center for Design, Research and Real Estate at the School of Architecture, who had heard from city and nonprofit officials about needed renovations to the park.

“They wanted to see a building that would be more open and could be used for special events, with better lighting, increasing the sense of safety, and more seating,” Norman says.

Norman then reached out to Associate Professor Larry Bowne, who has an ARC 409 Studio class. 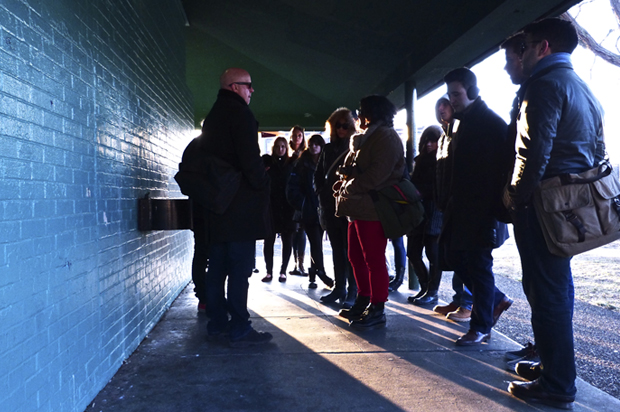 Students visit the existing structure at Skiddy Park with Associate Professor Larry Bowne, at left, early in the semester.

“The hallmark course in any architecture program in America is the design studio. It’s standard practice that studio deals with projects that are not thought of as real projects and don’t have real clients,” Bowne says. “From the very beginning of the Skiddy Park project, the students understood there was a real client and site, and a real budget. They had to think about what they were doing, who they were doing it for, how much it was going to cost and how it might get realized based on methods of construction.”

The 16 architecture students in Bowne’s class also worked with an independent student in industrial design and Assistant Professor Sinéad C. Mac Namara’s class, ARC 500, which blends engineering and architecture. The 15 architecture and engineering students in McNamara’s class focused on testing the designs in theory and with computer models, using such calculations as those that test the snow load under New York State codes.

“The idea was to test how well we could integrate the technical rigor with the open design process of an architecture class,” Mac Namara says. 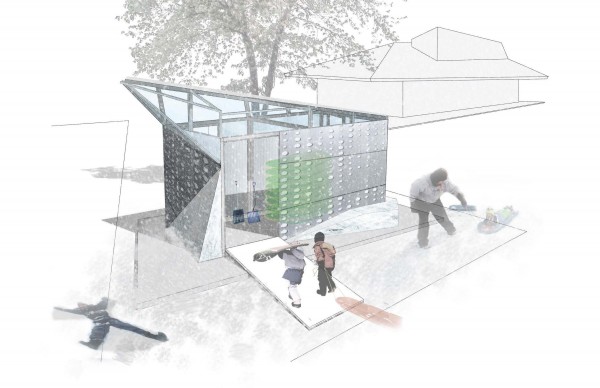 Mac Namara’s students offered recommendations on the shape, number and various kinds of materials, when they were presented with the various designs. “We were trying to model typical practice for students, giving them an idea of the back and forth that goes on among those involved in a project,” Mac Namara says.

Civil engineering student Stephanie Sanchez ’14 provided input on such calculations as the distance between supports on the side of the field house and finding beams that would better benefit the designs as respect to weight and sizing.

“It was an eye-opening experience to see how much we actually do know how to do,” Sanchez says. “We got the chance to visually see and apply what we know and it makes so much more sense when you see it in front of you.”

Sanchez found the challenge in blending the more structured expectations of a typical engineering course with that of the freedom that is found in architecture courses.

“Our professors emphasized that the lack of coordination is actually a huge issue in reality between architects and engineers, and we were able to see exactly that in our short time of working with the studio,” Sanchez says. “Whenever I do enter the working field, I will already have in mind what it will be like or what to expect.”

An architecture student in Mac Namara’s class, Steven O’Hara ’15, had to meld both the skills of an architecture and engineer student.

“This involved learning how to work with designers from the other side of the table, how to give appropriate information and options, and how to move toward engineering conclusions while maintaining design intentions,” says O’Hara, who was involved in creating a model and drawings of the existing park, among other tasks. “These are typical challenges that professionals experience, so I found it valuable to experience this in an academic setting.” 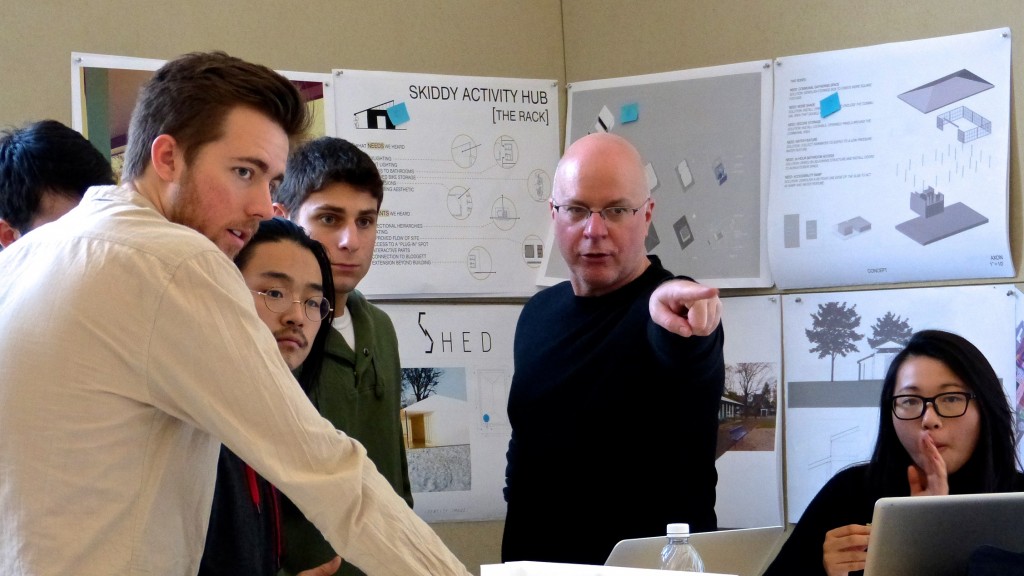 To get a variety of experiences, Bowne’s class worked in groups on different aspects of the project, such as marketing, budget or a specific design component.

Tiffany Montañez ’15, who worked on meeting logistics, learned the importance of collaboration—and to find one’s own voice while making compromises. “After we got a better understanding of the restraints, like budget or the opinions and needs of the community, it was a bit intimidating,” Montañez says. “However, we used these restraints to help us produce a compelling and effective design.”

They also worked with UPSTATE, the Near West Side Initiative and two Imagining America engagement fellows on developing community outreach.

Hearing from the community

Students met with community and Parks Department representatives in various meetings to hear about the needs of the community and present different components of the designs to community members to get feedback.

“We opened up walls on the streetside and the playground side, to create a pass through, a breezeway to the building. We designed a skylight that would sit on the existing roof,” Bowne says. “The engineers were amazing in figuring out how to carry the weight of a new skylight on top of existing wall and timber framing that was there.”

It also includes a storage unit for a nonprofit group that lends bikes and offers programs around cycling for children.

The students, who won a Chancellor’s Award for Public Engagement and Scholarship in the category of Innovation in Academic Engagement, made a final presentation to the community, which will have a renovated field house with a $35,000 grant from UPSTATE and matching funds from the city Parks Department.

“Everyone crowded around the model, and they were generally happy. That felt like success,” Montañez says. “It was a tough semester but I wouldn’t take it back for anything.” 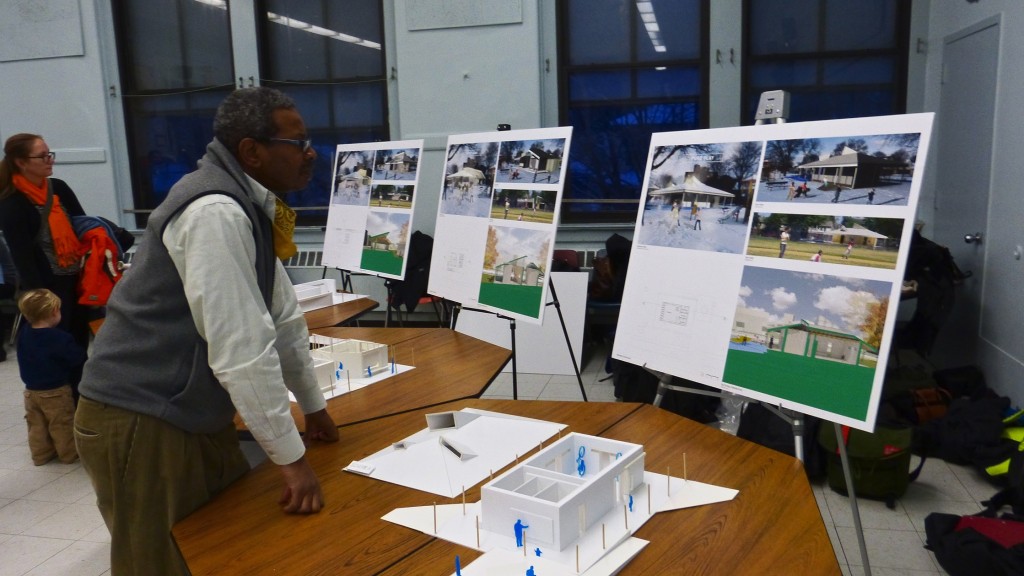 Syracuse community members gather to see the design work done by the students on a redesign of the Skiddy Park field house.