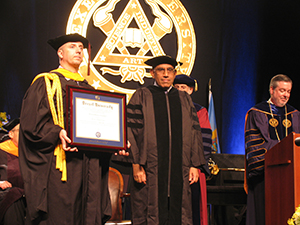 Varshney, a member of the Syracuse University community for 38 years, was recognized for his “trailblazing research,” notably his sustained seminal work on the development of distributed detection theory and data fusion methods that have fostered the advancement of sensor networks and pervasive sensing found in daily lives. His landmark 1997 book, “Distributed Detection and Data Fusion,” was the first book on the topic of distributed detection and data fusion and remains the only text on the subject today.

Data fusion is the integration of information from different sources into a single, unified result. While most of Varshney’s early pioneering work in data fusion was used by the military, in recent years his work, including image processing and remote sensing, has been used in a wide variety of ways—from NASA in helping to monitor the condition of air and space vehicles and the operation of unmanned aerial vehicles, to the medical field, helping to improve early breast cancer detection and detecting early-stage Alzheimer’s disease. His work on data fusion also has major implications on the rapidly growing field of big data.

As both a research scientist and as director of CASE, Varshney has had an important positive impact on the economy of New York State, working with companies of all sizes to bring innovation to the marketplace. He is a prolific scholar, having published over 200 journal articles and over 450 conference proceedings papers. As a mentor, Varshney has supervised 51 successful doctoral students, many of whom have achieved distinction in their own right.

A native of India, Varshney came to the United States to study at the University of Illinois at Urbana-Champaign. He earned a bachelor’s degree, master’s degree and Ph.D. there in just six years and came to Syracuse as an assistant professor at age 24.

He is a fellow of the Institute of Electrical and Electronics Engineers. From that organization, he has received the Third Millennium Medal (2000) and the Judith A. Resnik Award (2012), and has served as a Distinguished Lecturer. He also served as president of the International Society of Information Fusion (2001).