A chemist in the College of Arts and Sciences has received a major research fellowship from the Alexander von Humboldt Foundation, known for promoting academic collaboration among scientists and scholars from Germany and around the world. 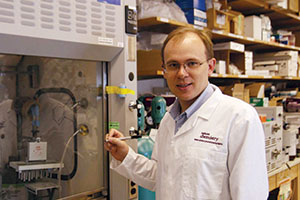 Ivan V. Korendovych, assistant professor of chemistry, has been awarded a Humboldt Research Fellowship to study protein engineering. Specifically, he will examine the manner by which proteins catalyze chemical transformations—a process that has applications for science, medicine and industry.

“I am extremely proud to serve as a Humboldtian,” says Korendovych, referring to the more than 25,000 Humboldt Foundation alumni worldwide. “This fellowship is the German equivalent of a Fulbright [Award], and I will use it to build stronger ties between Syracuse University and German universities.”

Central to Korendovych’s fellowship is the hypothesis that a single amino acid mutation can serve as the starting point for evolving reactivity not supported by the original protein. By combining cutting-edge protein engineering with directed evolution techniques developed in German universities, Korendovych hopes to come up with a set of design principles for the development of what he calls “novel, allosterically regulated, biocompatible catalysts.”

The result? New ways of looking at how proteins function.

“Developing efficient catalysts for chemical transformations is the ‘Holy Grail’ of chemistry,” says Korendovych, an expert in bioinorganic chemistry, biophysics and chemical biology. “Despite our progress in creating novel catalysts for industrially important unnatural reactions and re-engineering existing enzymes to adopt new properties, the problem of creating a catalyst for a particular chemical transformation is far from solved. This fellowship will enable me to collaborate with two world-renowned experts in bioengineering who, in turn, will lend their expertise and facilities to the project.”

Karin Ruhlandt, Distinguished Professor and chair of chemistry, is proud of Korendovych, whom she helped recruit to Syracuse University more than three years ago.

“This fellowship is a feather in the cap for the chemistry department and for the College of Arts and Sciences,” says Ruhlandt, who also is the college’s interim dean-designate. “Much of Ivan’s work is at the intersection of biology, chemistry and physics. It’s highly interdisciplinary and, in the case of this fellowship, relatively new and cutting-edge. Ivan and our department will benefit from this research for years to come.”

Prior to Syracuse University, Korendovych served as a postdoctoral fellow at the Perelman School of Medicine at the University of Pennsylvania. He earned a Ph.D. in chemistry from Tufts University.