A Challenge Measured in Megabytes 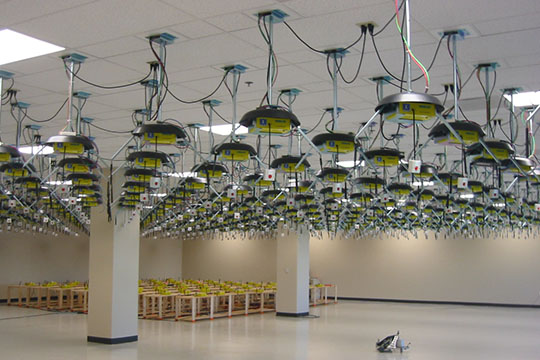 It was a challenge Kapil Borle and his team couldn’t resist.

A little more than a year ago, the doctoral student in electrical engineering read a notice on a tech news website about a defense agency competition. Participants would battle to transmit the most data—a randomly selected amount—between two radios within a certain time period.

“My initial reaction after reading the post was ‘It will be fun,’” Borle says. “Secondly, I thought it would be a great learning experience to build these radios. Though the downside to participation was that I had to postpone my graduation from 2013 to 2014, it was worth every moment.”

Sponsored by the Defense Advanced Research Projects Agency (DARPA), the Spectrum Challenge involved creating software techniques to allow radios to transfer data despite the use of the same electromagnetic frequencies by other radios and disruption from other signals. The need is especially crucial in times of military operations and disaster relief.

The team eventually placed second in the semifinals of the competitive part of the challenge in March. Since only the first place team moved to the finals, their run ended there.

But the members say their efforts in the build up to the competition and their final placement was an exciting and valuable experience.

“In my 13 years of being here, that was the most intensive period in terms of deadline pressure,” Chen says. “This is March Madness on steroids.” 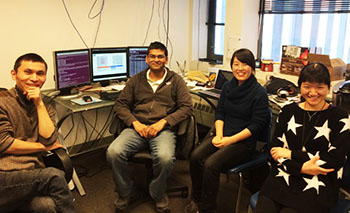 The work began in January 2013, when all the teams that signed up had to go through a series of exercises (so-called hurdles) to test their proficiency in the software technology. Teams were ranked according to their scores in the hurdle test. The top teams become finalists for the DARPA Spectrum Challenge, eligible to compete in two tournaments, one preliminary and one final, both taking place at DARPA’s headquarters in Arlington, Va.

The matches occurred on the Open-Access Research Testbed for Next-Generation Wireless Networks at Rutgers University, which streamed the proceedings live to big screens in DARPA’s conference center. There, contestants and representatives from government and industry watched the competition.

The challenge consisted of two separate tournaments: competitive and cooperative. For the competitive event, two teams sought to dominate the spectrum, with the winner being the first to transmit all its files of random data (or to successfully transmit the most packets—or data—in three minutes) from a source radio to a destination radio.

For the cooperative event, three teams concurrently communicate in the same band and the collective score of the combined team is assigned to each participant. For both events, teams had to develop algorithms to enable their assigned software-defined radio to dynamically communicate at a high rate in the presence of competitors’ signals within the same frequency band.

In the preliminary tournament in September 2013, the Orange Wireless Warriors didn’t do as well as they had hoped. A system bug due to the incompatibility between the radio software and the Linux operating system was part of the problem.

Team members spent the next six months refining their work for the final tournament—writing and testing the code and strategizing. The challenging part at times was bringing ideas to fruition. “Sometimes ideas can be deceptively simple to describe but can take quite some time to realize,” Borle says.

“We learned a lot of fancy things in theory; the most difficult part is to realize those ideas into practice,” says Zhu, who also postponed her graduation to work on the project.

Zhao appreciated the challenge and the various obstacles they had to overcome. “First, we needed to deal with lots of issues, from drifting channel quality to a broken Ethernet card, instead of making assumptions like what we usually do when writing a paper,” Zhao says. “Also, coding is challenging for me as I’ve never been involved in such a complicated project before.”

The work meant a lot of time in the lab for the team—sometimes all-nighters to meet the deadline. “There are days when Kapil, who was the major force behind this, slept in the lab after working until, at times, four o’clock in the morning,” Chen says.

The Orange Wireless Warriors was one of the 18 finalists out of 90 teams that had initially registered. The teams were from academic institutions and also individual radio hobbyists and practitioners.

Watching the radios compete kept the team on the edge of their seats. “It was very interesting to watch different strategies competing with each other, and see which one is better,” Zhu says.

Down to the finals

In the final competitive tournament, the Orange Wireless Warriors competed in a total of five matches against teams from around the country, winning four of them, missing out the opportunity to compete in the final round. The winners of the two tournaments were from Tennessee Technological University and Efficient Spectrum, a team of individuals.

Although they didn’t get to the final match, the work has prepared them for their future research and careers.

“The challenge has enabled me to understand communication systems better and this helps with my future research,” Zhao says. “I also made a lot of progress in programming, which is useful in many ways.”

Borle was able to improve his system design skills and also further realized the benefits of collaboration. “The importance of teamwork cannot be overstated,” Borle says. “There are a lot of great people with great ideas, great system design and programming skill out there and they come from diverse backgrounds.”

Chen believes the experience has given the students the confidence to pursue any work they decide.

“Our group is mostly theory oriented—meaning we drive equations, write papers, do simulations,” Chen says. “This is a totally different challenge. You can’t just submit a paper that says it will work, you have to make it work. This will give them confidence to handle not just academic research but really solving real-world problems.”