School of Information Studies (iSchool) alumnus Wiley Cerilli, vice president on the Constant Contact executive team, has joined the school’s Board of Advisors. 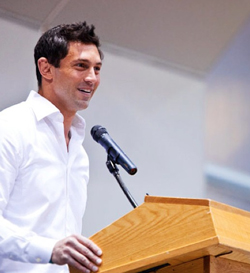 Cerilli runs one of the largest divisions for the company. Prior to Constant Contact he was the CEO and founder of a technology company called SinglePlatform, until the business was acquired in 2012 by Constant Contact for $100 million.

While running SinglePlatform, the company was named Top 10 and 25 “Companies to Watch” by Business Insider, The Next Web and Website Magazine. Cerilli was named as a “Top 25 CEO” in New York and “Top 10 People to Watch” by Crain’s.

Before SinglePlatform, Cerilli was the executive vice president of partner sales and marketing at Seamless. He served on their executive team for nearly 10 years, during which time the company was named the fourth Fastest Growing Company in the Country by Inc. Magazine, and was acquired by ARAMARK.

He has been featured in numerous publications from Forbes to The Huffington Post, and is also a contributing writer to Business Insider, The Observer and The Washington Post.

“Wiley is a successful tech entrepreneur who has received national recognition, and I am thrilled that he has decided to join our board,” says iSchool dean Liz Liddy. “I am looking forward to the advice and experience that he will provide to us, as we collaborate together on initiatives that include entrepreneurship and innovation.”

In addition to his career at Constant Contact, Cerilli serves on the board of Manitou Experience, a summer camp for children who have lost a parent or sibling.  He speaks widely on entrepreneurship.