Earth scientists in Syracuse University’s College of Arts and Sciences have determined that the Tibetan Plateau—the world’s largest, highest and flattest plateau—had a larger initial extent than previously documented.

Their discovery is the subject of an article in the journal Earth and Planetary Science Letters (Elsevier, 2014).

Gregory Hoke, assistant professor of Earth sciences, and Gregory Wissink, a Ph.D. student in his lab, have co-authored the article with Jing Liu-Zeng, director of the Division of Neotectonics and Geomorphology at the Institute for Geology, part of the China Earthquake Administration; Michael Hren, assistant professor of chemistry at the University of Connecticut; and Carmala Garzione, professor and chair of Earth and environmental sciences at the University of Rochester. Hoke’s research was funded by the Tectonics Program, part of the National Science Foundation’s Division of Earth Sciences. 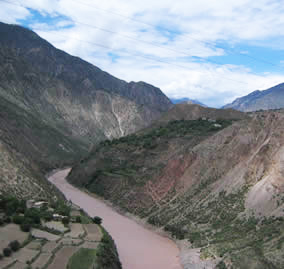 A view of the Mekong (Lancang) River canyon, as it traverses and cuts the southeast margin of the Tibetan Plateau near Deqen, in China’s Yunnan Province

“We’ve determined the elevation history of the southeast margin of the Tibetan Plateau,” says Hoke, who specializes in the interplay between the Earth’s tectonic and surface processes. “By the Eocene epoch (approximately 40 million years ago), the southern part of the plateau extended some 600 miles more to the east than previously documented. This discovery upends a popular model for plateau formation.”

Known as the “Roof of the World,” the Tibetan Plateau covers more than 970,000 square miles in Asia and India and reaches heights of more than 15,000 feet. The plateau also contains a host of natural resources, including large mineral deposits and tens of thousands of glaciers, and is the headwaters of many major drainage basins.

Hoke says he was attracted to the topography of the plateau’s southeast margin because it presented an opportunity to use information from minerals formed at the Earth’s surface to infer what happened below them in the crust.

“The tectonic and topographic evolution of the southeast margin has been the subject of considerable controversy,” he says. “Our study provides the first quantitative estimate of the past elevation of the eastern portions of the plateau.”

Historically, geologists have thought that lower crustal flow—a process by which hot, ductile rock material flows from high- to low-pressure zones—helped elevate parts of the plateau about 20 million years ago. (This uplift model has also been used to explain watershed reorganization among some of the world’s largest rivers, including the Yangtze in China.)

But years of studying rock and water samples from the plateau have led Hoke to rethink the area’s history. For starters, his data indicates that the plateau has been at or near its present elevation since the Eocene epoch. Moreover, surface uplift in the southernmost part of the plateau—in and around southern China and northern Vietnam—has been historically small.

“Surface uplift, caused by lower crustal flow, doesn’t explain the evolution of regional river networks,” says Hoke, referring to the process by which a river drainage system is diverted, or captured, from its own bed into that of a neighboring bed. “Our study suggests that river capture and drainage reorganization must have been the result of a slip on the major faults bounding the southeast plateau margin.”

Hoke’s discovery not only makes the plateau larger than previously thought, but also suggests that some of the topography is millions of years younger.

“Our data provides the first direct documentation of the magnitude and geographic extent of elevation change on the southeast margin of the Tibetan Plateau, tens of millions years ago,” Hoke adds. “Constraining the age, spatial extent and magnitude of ancient topography has a profound effect on how we understand the construction of mountain ranges and high plateaus, such as those in Tibet and the Altiplano region in Bolivia.”