The ongoing search for invisible dark matter is the subject of a recent article involving physicists from The College of Arts and Sciences.

Research by Richard Schnee, assistant professor of physics, is referenced in Symmetry magazine, a joint publication of the Stanford Linear Accelerator Center in Palo Alto, Calif., and Fermilab in Batavia, Ill. 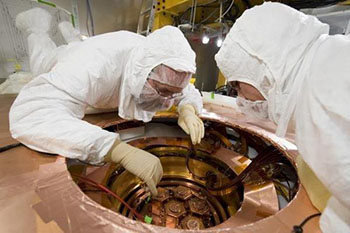 Hyper-sensitive detectors, such as the one at the Soudan Underground Laboratory in Minnesota, are used to spot WIMP interactions. (Photo by Reidar Hahn, Fermilab)

An expert in particle physics, Schnee hopes to find traces of dark matter with an experiment that is more sensitive to such low-mass dark matter particles.

He and his postdoctoral research associate, Raymond Bunker, are part of a multinational team of scientists working on SuperCDMS, an experiment in the University of Minnesota’s Soudan Underground Laboratory that is designed to detect dark matter. (In addition to leading part of the experiment’s data analysis, Bunker helped edit a paper about the experiment that has been submitted to Physical Review Letters.) Schnee’s team is rounded out by two graduate students, Yu Chen and Michael Bowles.

Although dark matter has never been seen directly, it is thought to be six times more prevalent in the universe than normal matter. 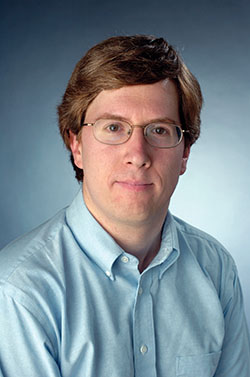 “Everywhere we look, objects are accelerating due to gravity, but the acceleration is too large to be caused by only the matter we see,” Schnee says. “Even more remarkably, we can infer that this extra dark matter is composed not of normal atoms, but other kinds of particles.”

Scientists believe the mystery particles are WIMPs (Weakly Interacting Massive Particles), which travel at hundreds of thousands of miles per hour through space and shower the Earth on a continuous basis. Unlike normal matter, WIMPs do not absorb or emit light, so they cannot be viewed with a telescope.

“Spotting the occasional WIMP that interacts with something is extremely challenging because particle interactions from natural radioactivity occur at a much higher rate. Detecting a WIMP is like spotting a needle in a haystack,” Schnee continues.

Enter CDMS, whose hypersensitive detectors can differentiate between rare WIMP interactions and common ones involving radioactivity. The size of a hockey puck, a CDMS detector is made up of a semiconductor crystal of germanium that, when cooled to almost absolute zero, can detect individual particular interactions.

The presence of layers of Earth—like those at the Soudan lab—provide additional shielding from cosmic rays that otherwise would clutter the detector, as it waits for passing dark matter particles.

“We cool our detectors to very low temperatures, so we can detect small energies that are deposited by the collisions of dark matter particles with the germanium,” says Schnee. “Other materials, including argon, xenon and silicon, are also used to detect low-mass dark matter particles. We need to consider as many materials as possible, along with germanium.”

SU is one of 14 universities working collaboratively in the search for WIMPs. In the Physics Building, Schnee and his team have constructed an ultra-low radon “clean room,” in hopes of reducing the number of interactions from radioactivity that look like WIMPs.  (Alpha and beta emissions from radon, a type of radioactive gas, can mimic WIMP interactions in a detector.)

“Unfortunately, radon is all around us, so, even with this ‘clean room,’ some radon-induced interactions will still mimic WIMPs,” Schnee says. “All of us are building different types of detectors and are constantly improving our methods, in hopes of spotting WIMP interactions.”