College of Law students continue to earn national accolades for their trial team accomplishments. On March 28, Jason Krisza L’14 and Jennifer Camillo L’15 competed in the National Trial Competition (NTC) in Austin, Texas, and placed fifth overall out of more than 300 teams. 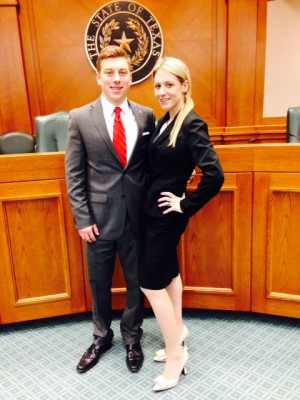 “Our team was strong on the federal rules of evidence and was taught by the top trial advocacy coaches in the nation. I believe that was the key to our success,” says Camillo.  “We couldn’t have done it without our coaches and Syracuse Trial Team alumni who came back to practice with us and give us the feedback we needed.”

In addition, the College of Law finished with the best record of New York state law schools and won the prestigious New York State Bar Association Tiffany Cup and a $7,500 scholarship for the college. This is the 18th time Syracuse has won the Tiffany Cup.

Morgan McKinney L’15 also received the Best Overall Advocate Award for the NTC Regional Competition and $1,500 scholarship. McKinney was a member of the Syracuse finalist team at the 2014 NTC Regionals.